The Hotel Is Located In The Picturesque Area In The pine Forest. The Hotel Offers Comfortable Rooms With mini Bars Direct Telephone Lines Including 3 Suites with Jacuzzi Video And Air Conditioning. We Have A restaurant Where You Can Have A Rest In A Pleasant atmosphere. Friendly Staff Will Do Their Utmost To make Your Stay Comfortable And Pleasant. 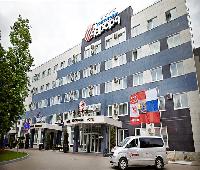 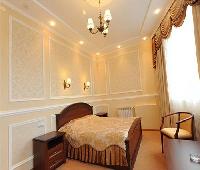 The Hotel Is Located In The Picturesque Area In The pine Forest. The Hotel Offers Comfortable Rooms With mini Bars Direct Telephone Lines Including 3 Suites with Jacuzzi Video And Air Conditioning. We Have A restaurant Where You Can Have A Rest In A Pleasant atmosphere. Friendly Staff Will Do Their Utmost To make Your Stay Comfortable And Pleasant.

142A Engelsa Ulitsa,Kursk,RU,Russia
Ranked
#4 of 7 hotels in Kursk
Overall Rating 4

One day stay - would do.

Main advantage of this one day luxury hotel is its flexibility. If you arrive to Kursk by night train and check in around 7am and then leave same day by same night train and check out around 9pm they would only charge you one night fee. Other hotels which are really few (actually only one more decent) would charge you 1,5 or even 2 nights. That’s about it since the hotel isn’t looked after at all. Not very clean, room is simple, no air con (try to open a window and get eaten alive by hungry mosquitoes), mini fridge is empty, TV is old, sink is cracked, towels are yellowish (white one day), B-fast is poor (come not early enough and enjoy tiny pieces left), open air restaurant will provide you modest food with loud music every single night. But the nature around is really nice since it’s situated almost in the forest actually city outskirt. Wi-Fi is there but not in all rooms. The only reason to stay again is lack of choice. But maybe it’s better in more expensive rooms.

The worst hotel I have ever stayed. Stay away from this hotel. First of all, the info regarding the hotel was not right. The hotel does not have a swimming pool. It is a hot bath (Russian traditional hot bath). No air conditioning (so in summer in can be very hot). Also no fan. We were told to open the windows but it was surrounded by woodlands which breaded mosquitoes with no insect repellent available. There are only one Iron and Ironing board for the whole hotel (at least the whole floor of 20 rooms) to share. We were late for an event due to the Iron was being used by other guests. Our bed was made from a fold over bed which was very uncomfortable. The additional bed was two mattresses stack up one on top of the other. The food was a disaster especially if you cannot eat their meat. Very little options. No cereal, no toast, my kids was complaining a lot. Internet was very slow and was very limited coverage for the rooms. We could not move to another hotel as we were told to pay for the whole stay on arrival. In Conclusion, the worst hotel ever! The staff do try hard to help us but due to the nature of the hotel's limitation combined with very minimal English (only 2 staff in total can speak English at all which was minimal basic english in the first place) the situation was not possible to be rescued. Just find another hotel if you are going to Kursk!

I stayed there for several months during the winter, and there were problems with the heating early on but they did sort them. It must have been very nice once - it's now fading a little with worn carpets and furniture.
The staff are very welcoming and helpfull, live music with dinner in a nice resturant/ballroom. Plumbing facilities could be better. Considering where it is, it's OK.