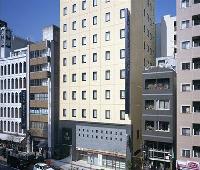 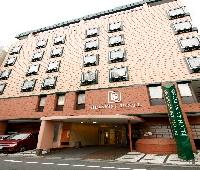 The location is near a train and metro station line, so it was very convenient. The room was clean and small as I expected. I would compare the size of the room to that of a cruise ship room.

Considering we just slept here, luxury products were not needed or expected. The good thing about the room was that it had a bath & shower with extendable head. Very useful to sooth sore backs from long days of walking.

I found the staff to be very friendly and helpful. This was my first stay at a Toyoko Inn for my trip in Japan. Little did I know that all the rooms look the same in all the hotels.

Comfortable and functional in Very compact and econimical way

This is a Budget Hotel with a very compact but very functional spaces. Though the room looks small it has everything which a person need for comfort.
The toilet is also small but has everything even a bathtub.
This Hotel is located within an Office area neighbourhood , hence dont see much life in the mornings and night after office hours.
But no English language programmes on TV, It will be good if they add it as well.
Staff is very freindly and cooperative. They dont have a restaurent , breakfast is served in the lobby and is all Japanese stuff. I survived on buns, salad and coffee.

Average but value for money

the location is a bit not so convenient. far from the nearest subway station. not so many restaurant near by
the good thing is they have free shuttle to and from Akiba station.
free breakfast daily, room is nicely presented, staffs are friendly and helpful, speak good English. they have luggage storage as well.

We've stayed in five of the Toyoko brand and they are pretty much the same: Clean, reasonably priced, with a tasty but simple breakfast. The rooms are small so you wouldn't want to spend much time there, but they are well equipped and quite adequate for sleeping, showering, storing your suitcase, etc. A single room is downright tiny so I paid just a little more for a double although I was alone.

The Toyoko chain's rooms are booked early because they are such a good deal. Four months before our arrival in Tokyo, only a few of their hotels had twin rooms left. I'm sure they are fully booked every night, so trying for one at the last minute is probably a waste of time.

This one is in Bakuracho, near an exit of the JR Sobu line which leaves Narita Airport as the JR Kaisoku Airport line, and changes names on the way to Tokyo. Taking that line and getting off at Bakurocho means not having to take the train all the way to Tokyo, then walk a great distance in Tokyo Station to find the subway you need to take you back in the direction you just came from. We estimated by taking the JR Kaisoku (JR Sobu) line directly to the hotel we saved at least half an hour and avoided lots of schlepping our bags around.

We especially appreciated Yuka at the front desk, a charming and helpful person.

Stayed in a small double room, the mattress was one of the harder ones we slept on. The room was clean, the staff were friendly and spoke some english, though thankfully most of their policies were printed in multiple languages. If you have an early flight to catch out of Narita, the desk opens very early.

The hotel is actually one stop from Akihabara proper, which meant the trains were always packed full whenever we got on them, and then emptied out in Akiba, It might be easier during some times of day to just walk to Akihabara station and get on from there.