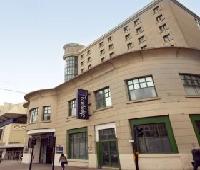 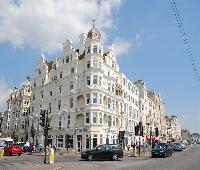 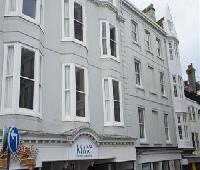 Fine If You Get a Good Price

I don't normally use Travelodge, but chose this one for the location and the fact the price was less than £50 even although I only booked about 10 days beforehand.

First impressions weren't great as the large windows around the entrance were absolutely filthy and obviously hadn't been cleaned for months.

I got a warm welcome from both receptionists and check in was simple and quick.

The room was on the 6th floor and was a bit tired, but clean. The bed was comfortable but there was no duvet or blankets, just a sheet which was fine until the middle of the night when I woke up cold.

The room was double glazed, and being on the 6th floor the windows had stickers on them advising that they had restricted opening. I couldn't actually get either window to open which made the room hot in the evening and there is no air con.

Checkout was also simple. No queue and another cheerful receptionist gave me a ticket for 25% off the NCP car park behind the hotel that I used.

A well located budget hotel, 30 seconds from the sea and in the centre of town.
Worth it if the prices aren't ridiculously high.

After reading a lot of the reviews I wondered what I was letting myself in for. Check in was fast, efficient and friendly and I was given a room on a higher floor as I asked for a quiet room (or as quiet as Central Brighton could be).

Allocated 702 which on entering was a comfortable temperature as the curtains had been drawn. Outside temperature was around 20C with sun directly on window at the time.

A small notice on bed advised this was a way of keeping the temperature down. No air conditioning in this room, but opening windows (not by much though as a chain prevented more than a few inches), and a separate secondary glazing sliding window which also helped keep the heat out, and kept noise from outside down. There was a fan in the small wardrobe, but I didn't need to use it.

Fittings in room were rather tired and appeared cheap, but seemed relatively clean, although there was some dust on some surfaces. Carpet had what appeared to be a couple of cigarette burn marks and needed a good vacuum in corners.

Large and (for me) relatively firm and comfortable mattress. There was just a single sheet to cover which I found fine, but there was a duvet in the wardrobe if required.

Small bathroom with a shower tray with curtain around. Seemed to be some loose dirt at one end of tray and I was able to wipe some of this away, although not all. Suggests cleaning could be more effective here. Basin, toilet and wall tiles clean. Hot water took a long time to run through, but once at a decent temperature it did stay at that. Water pressure was rather low and took ages to fill basin.

No sign of mold or damp in this room.

If you book here, and go with medium to low expectations you shouldn't be disappointed. This is my first time in a Travelodge but I wouldn't hesitate to book another one if price and location suitable.

A nice Hotel in great spot for shops beech and nearby towns Worthing and Eastbourne, had a few problems 1st morning with no hot water but the receptionist on that morning was most helpfull and sorted out another room straight away and 2 free breakfasts !

Rooms are dirty and damp.
The wifi could not reach our room. I was trying to find a power socket and moved the bed and As you can see in the pics I was the first to do that in years.
Also it was so cold during the nigth that we had to but on more clothing.
The only good thing is that the shower had good power but the ceiling had mold on it.

Arrived here at 3.30am on Thursday 8th June.. admittedly it was literally booked as a place to lay our heads prior to us visiting a local festival but my goodness of we had opted to stay here the whole weekend we would have been in trouble..
firstly we were greeted by a gang of people smoking what I can only describe as cigarettes you might get in Amsterdam RIGHT outside the front entrance, really off putting and frankly just making the place look really off putting from a "kerb appeal" perspective..
The young man on reception in fairness was really nice and friendly and in no way is my review a reflection of his service or friendly manner.
As we entered our room there were two immediate factors that overwhelmed us immediately - one being the god awful smell of damp and the other being the overbearing heat of the room.
With zero ventilation and an air conditioning unit seemingly only there for show we were in for a long hot, stinky night.. it bordered on unbearable to be honest and as I say we were really glad to only be occupying the room for 8 hours. The shower was also rubbish with zero power, bathroom a bit rusty and unclean.
Sort your aircon out Travelodge? I realise you are a budget brand and that's fine, but even budget hotels can be at the top of their game. It's a real shame because the location is really great, literally off the seafront and right by the pubs & clubs. Book this place as an absolute last resort honestly.