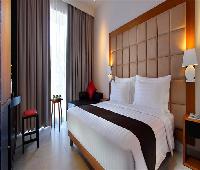 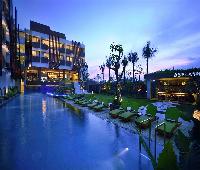 The Sun Hotel and Spa

Looks can be deceiving...

I wasn't impressed with this hotel....it's quite rundown and needs updating....whilst some of the comments by management on other reviews mentioned they update the hotel I don't believe this is true. Whilst this is cheap accommodation I think the photos on the website were really deceiving and not accurate!

The first room we were in was a superior 2 bedroom apartment....avoid at all costs! This room was disgusting...the bathroom looked nothing like the picture advertised on their website (shower over bath combo where pictures showed a new modern walk in shower) we could have possible gotten over it if the bathroom in general wasn't so disgusting and dirty. The shelf under the TV also looked like it was about to fall off the wall, wall paper peeling, furniture has seen better say....

In saying that we only stayed in that room for 1night and then upgraded to a 2 bedroom deluxe. Overall this room was much better cleanliness wise and has a bigger balcony and better bathrooms. The shower did flood the floors as mentioned in other reviews but my husband tilted the shower head which made it a bit better (still some slight flooding but not as bad).

The beds in both rooms were quite hard and uncomfortable and we had to keep asking for new towels in the room as we weren't supplied with new ones....I get they are trying to save water from laundry but we had to keep using the towels to mop up the flooded bathrooms!

Breakfast was ok not much western food to choose from but the omelette was good and if your happy to pay extra the cappuccino was pretty decent. It would have been nice if there was maybe bacon? Though there were sausages which I wasn't a fan of.

Staff in general were amazing and very friendly, though the night time staff who my husband dealt with were less than enthusiastic to help when required.

The spa was a bit shocking and by this I mean we couldn't get in! We were told 24hr notice so tried to book in a massage the day before to be told fully booked which was annoying. Also had same issue with spa across the road.

Very close to some little restaurants (though we didn't try them) and some deli's. Taxi to Seminyak square was about 35k rupiah it was great as a bit to far to walk.

Restaurant food was really nice and the salsa night was a lot of fun.

So overall I wouldn't stay here again but if your looking for something cheap and don't have 3+ star hotel expectations then this hotel will be perfect for you.

Apartment type of living in a quite remote area

I chose a suite 1 bedroom type for my stay here. Quite convenient for a longer stay as there was a small pantry with a big refrigerator to put food inside. For the utensils, you have to ask them first to provide. There were nothing in the cabinets. Not even a hairdyer. There was a sliding door parting sitting room and bedroom. I thought the door was not needed as it could block my view to the TV in the sitting room & the TV was quite far from the bed.

The hotel was in a quite remote area that you must have had rental cars / motocycles, but you could also walk to see greeneries before reaching the main road. Only that the walking was quite far.

Booked for one night (thank god for that). Our room was big and clean. But... jere it comes: The curtains were very greasy. The sofa had some dark spots and was broken ..... The paint was blown in many places. We woke up before 7 am because of many roller coasters in the corridor. For breakfast we have had some moldy bread but the waiter quickly refreshed it. We complain but we only get a " we apologise ".
Happily we booked for one night.

There were 7 of us and we booked 2 rooms. The rooms were spacious and fit all of us fine.

We arrived in the afternoon and caught a taxi to the hotel which is about a 10 minute drive out of the main town in Seminyak.

By the time we checked in, we were all tires and hungry so we ordered room service. The food is cheap and actually pretty good.

The pool is open all night which is great because it is always hot in Bali, even at night!

There is a money exchange store at the hotel which is very convenient however the rate is poor so i would reccommend exchanging a bit at the airport and the rest in Seminyak but make sure you go to an official store with a proper store front.

Now, to the downsides of this hotel. This was my first time in Bali and I must say, Balinese standards of 3 star hotels are very different to the the rest of the world. The cleanliness was the main issue with this hotel. The sheets and towels off white/grey with stains all over them. The bed sheets in one of the beds was stained and looked like it hadn't been washed. We asked for new sheets, these were delivered to our room and were also stained. Thank god one of the girls brought an extra blanket because we did not sleep in those sheets..

There was also a foul odor from the drains in the bathroom. It was very strong and consistent throughout our entire stay. The poorly designed shower also flooded everytime someone showered.

All the faucets were grimy and in need of a scrub. Our kettle had a layer of gross grime on the bottom. We didnt realise until we boiled water and poured it into a clear cup to brush our teeth, only to see gross floating debris.

One of the ac units didn't work which was frustrating because the room units were not strong enough to cool down the entire apartment.

Overall, this place was ok for the price but we wouldnt come back unless they steppes up the cleanliness levels.

Stayed here for 3 nights on April 2017. Chose the one bedroom but got upgraded to two bedroom with bigger space.

Pros:
1. Huge room. You got kitchenette, living room with Flat tv and balcony. Bedroom is good. Bathroom's size is pretty good.
2. Pretty nice pool.
3. Staffs' service are awesome, hospitality is their no1 priority.

Cons:
1. The floor in my room is a little bit dirty. My guess is because the lamp in my room is a yellowish lamp, so when the cleaning service do their job, they cant see the dirt clearly, because of the color of the lamp.
2. Bathroom has no hot water. This is a pretty big issue.
3. Towels are a bit torn out.
4. Breakfast is so average. The only exception is the omelette.
5. Location of the hotel is a bit far from the main road, but for people who seeks peace, this is the perfect place.

Although the cons are more than the pros But i still manage to handle it. So i will still going to recommend this hotel to others and would love to stay here again when coming to bali.