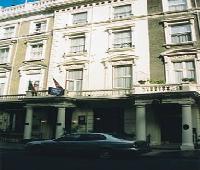 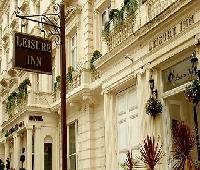 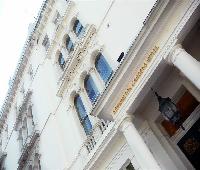 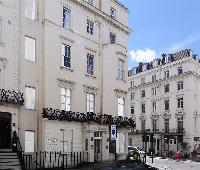 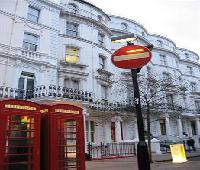 On arrival we had to phone the hotel to get the receptionist to appear which took 15 minutes. You couldn't sit down in the reception area as it was full of the hotel owners family who were just sat about talking. Our whole room stunk of raw sewage and I couldn't even go into the bathroom without heaving. When I asked for another room the receptionist wasn't surprised, he made no comment and just gave me a key to another room. There were no towels in the room or a bathmat etc. The base of the sink was filthy. The tea and coffee facilities consisted of half a dozen packets of sugar, 6 sachets of coffee and what looked like a used tea bag and no milk at all. The tv was so high on the wall you couldn't watch it. The shower took ages to warm up then it got so hot you couldn't wash in it as it wouldn't turn down at all. All or nothing. There was a fused socket that was sellotaped to the wall. Holes in the wall were just wallpapered over. The walls were paper thin so you could hear everything going on in other rooms!! The next morning we had both been bitten in the night. I could go on but I won't. All there is to say is avoid this place like the plague. I cannot understand why environmental health have not closed it down. As far as I could see there was no exterior fire escape which is legal requirement for a 5 floor building, and no signage of any sort. I would rather sleep on the street outside!!

Even though this is a budget hotel the place is Shocking, the rooms are filthy, The hotel is falling apart inside and out. Breakfast consisted only of croissants as there was no milk for the cereal, Please do not waste your money

Arrived on a night, receptionist half a sleep on the sofa, was given a room in the basement next to the breakfast room, the food was SHOCKING! It was suppose to be a continental breakfast, we were given stale bread and stale croissants with the option for jam/butter and then really cheap cornflakes, the milk looked like it was watered down and that's all the options we had. No meats/fruit or other choices of cereal, we could hear everyone having their breakfast and the place was run down and nothing like the pictures that they show on the booking.com website

Basic but clean and friendly

We stayed here with our three children for a few nights mid-week, and although the facilities are basic, the reception staff were unfailingly friendly, and all the facilities were functional. There was plenty of breakfast, and it was all very fresh. The rooms were cleaned daily. Brilliant for the price!

I had a nice 14 nights stay in Apollo hotel Bayswater , booked a single but was given double on the second floor I loved all the staffs , they were so nice to me that I never felt being there on my own whenever I visit London Apollo will be my first and last chance .