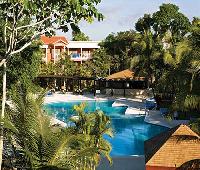 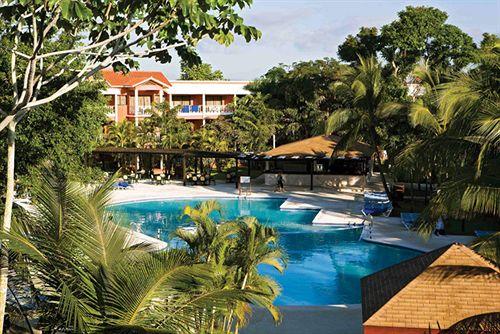 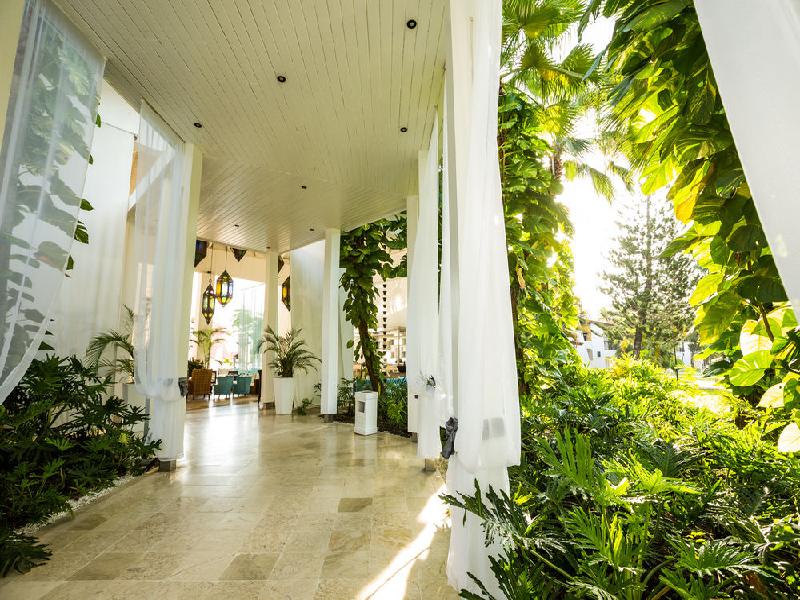 Property Location With a stay at BelleVue Dominican Bay - All Inclusive in Boca Chica, you'll be near the beach and minutes from Boca Chica, and close to Nautical Club of Santo Domingo. This all-inclusive resort is within the region of Guayacanes Beach and Guavaberry Golf and Country Club. Rooms Make yourself at home in one of the 437 air-conditioned guestrooms. Rooms have private balconies where you can take in pool and garden views. Wireless Internet access (surcharge) keeps you connected, and cable programming is available for your entertainment. Private bathrooms with shower/tub combinations feature makeup/shaving mirrors and hair dryers. Rec, Spa, Premium Amenities Dip into one of the 2 outdoor swimming pools or enjoy other recreational amenities, which include a nightclub. Additional amenities include wireless Internet access (surcharge), gift shops/newsstands, and wedding services. Dining A complimentary hot/cold buffet breakfast is included. Business, Other Amenities Featured amenities include a business center, audiovisual equipment, and currency exchange. This resort has 2 meeting rooms available for events. Free parking is available onsite. 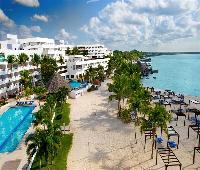 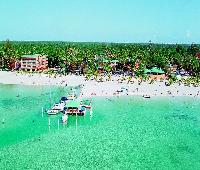 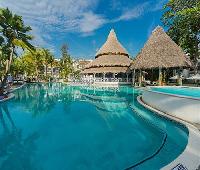 Property Location With a stay at BelleVue Dominican Bay - All Inclusive in Boca Chica, you'll be near the beach and minutes from Boca Chica, and close to Nautical Club of Santo Domingo. This all-inclusive resort is within the region of Guayacanes Beach and Guavaberry Golf and Country Club. Rooms Make yourself at home in one of the 437 air-conditioned guestrooms. Rooms have private balconies where you can take in pool and garden views. Wireless Internet access (surcharge) keeps you connected, and cable programming is available for your entertainment. Private bathrooms with shower/tub combinations feature makeup/shaving mirrors and hair dryers. Rec, Spa, Premium Amenities Dip into one of the 2 outdoor swimming pools or enjoy other recreational amenities, which include a nightclub. Additional amenities include wireless Internet access (surcharge), gift shops/newsstands, and wedding services. Dining A complimentary hot/cold buffet breakfast is included. Business, Other Amenities Featured amenities include a business center, audiovisual equipment, and currency exchange. This resort has 2 meeting rooms available for events. Free parking is available onsite.

We was at hotel on october for 4 nights and was amazing, excellent hotel staff, good food, entertainment activities were excellent, cleanness of the room, beautiful green areas, pools and bars amazing, this is real an excelllent hotel for vacations i really recommend this as holiday destination, thank you veru much every staff.

holiday of a lifetime

how amazing 2 week all inclusive holiday staying at the belle vue my first time on holiday abroad and first time flying (9 hrs) but well worth it staff and entertainment staff were so friendly a wide selection of food to suit everybody private beach food and drinks served all day can laze about sunbathing around the swimming pools or adventure days out lots to see and do loved it so laid back a great first holiday for myself and patner bad points the russians were there what rude ignorant people also the reception staff have their heads up their own..... as helpful as a chocolate teapot the grounds were beautiful and kept to a high standered rooms a little tired but clean know your money exchange before you go as people will rip you of and want you to buy everything you will have such an amazing holiday here and with entertainment staff can party on the beach at night theres a night club on the beach called black and white and a shop on the hotel that nobody tells you about and put on lots of insect repelent at night watching entertainment but enjoy this breath of air beautiful place x

Lovely resort, lovely staff. Only downside is how rude the other guests are to the staff

We ended up going here last minute as we were due to go to Cuba but that was cancelled because of the hurricane.

The best part of the resort was the staff, they can not be polite and attentive enough, really friendly and they spent time to get to know the guests.

The food is really nice, my mum is from jamaica and it was really interesting to see similar ingredients used in different ways. A highlight was the pasteles en hoja. Its very similar to nigerian moin moin. Really nice. Also the Dominican rice was AMAZING! My partner hates rice but he loved the rice there.

The rooms were nice enough, to be honest it may have been basic but for goodness sake, you're in paradise. Why the hell would you want to spend your time in your room?

The drinks were good, incredibly sweet but to be honest its the Caribbean, if anyone has tried sky juice (Jamaican drink) that will put you in a coma!

The day trips were really good. I'd reccommend the one where you get to go out and go to a Dominicans house. It was an AMAZING day trip but you will end up spending so much so take money with you.

Here is to the downsides. And it is literally just one.

The other guests treat the staff like dirt and its really upsetting to watch. It costs nothing to say please, thank you and hello (or por favor, gracias and hola) and piling up your plates and not putting them in the bin when you are by the pool proves you have absolutely no class.

I felt like there was an element of racism, like other guests felt like people from the Caribbean were below them, my partner who is white noticed it as well.

All in all it's a lovely place and I can't wait to go again.

DO NOT book this hotel. This was the worst hotel I have ever stayed in. One star is way too high a rating. Dirty rooms, dirty bathrooms, leaking ceiling, outlets don't work. TV doesn't work. Bad food.

I should have known with a name like Bellvue it was going to be a crazy place.

I stayed at the Dominican Bay all inclusive for 4 days. It is close to SDQ airport which is great and when driving up the place looks great. Reception area is very nice but dimly lite. Check in was fairly easy except the worker did not have change and tried to stiff us on 94 pesos. The bellboy helped us to the room and that's where the disappointment began. The room was old as hell, everything looked like from the mid 90's. They said the rooms where updated but not at all. The bathroom was dismal 2 towels for 2 people that housekeeping guarded towels like sacred artifacts. Which I'm guessing they are judging by the rooms. The balcony was nice and spacious but had 2 plastic white chairs, not very comfy and they were old to. The view was the facing the street and in the distance you could barely see the beach. I got a great look at barbwire fencing and the basketball court next door that was open and used daily until like 10pm. The food was buffet style served in a nice large building with average tables and chairs and place settings. Everything was self serve including the beverages and on first looked everything looked nice and fresh but the selections catered more towards a certain demo. I was expecting more Spanish and Caribbean food. Instead it was daily Mexican and European cuisines. Which did not make any sense until I continued my stay there. The food was bland certain things tasted ok but nothing I can remember right now blew my mind. The desserts where all very sad and again bland. I ate at the restaurant at the beach which I found out on the 2nd day existed through a kind staff member. You need to make reservations by speaking to guess services at reception on the morning of the night you want to attend they also have a italian restaurant but I did not get to go because it was closed while I was there. Anyways, the food there is made to order and it is a Caribbean based menu. Its nice and small beach front area way better than the buffet. The food was better there as well as the wine. The main pool was always dirty and the pool boy would literally take 10mins max to clean the pool in the morning and throw unmeasured amounts of chlorine or shock it could have been flour for all I know but it was during a time when people would swim. Needless to say I would lay out for at least an hour before jumping in so that whatever he threw in with his bare hands wasn't as potent to me. The lounging chairs are old and a majority of them are flat and don't recline, so I became good at moving loungers around so that I can sit next to my friend. The liquor was bottom shelf most not all of the bartenders were nice and made to order any drink you like. They were served in very small plastic cups, so if you like to drink I suggest tipping the bartenders and telling them to make it strong otherwise you will have dozens of empty plastic cups. The beach area is a far walk with lots of stairs which is nice in the heat, just kidding. Do not make the mistake I did and forget to get towels from the POOL area prior to going to the beach. There are no facility towels provided at the beach. Its a long walk back so don't forget anything. The beach area was nice and I must say one of the best things about this resort is the security was great always around keeping the local vendors away. The daily 9pm after dinner show was corny but slightly entertaining because there is always that one drunk guest typically a guy whose sexual regressions come out during a dance off. The disco or club opened at 11pm and it was located by the beach so you had to take a walk. It is a old musty smelling building which in its hay day was probably a very nice spot but they don't update anything so its old now. The music at the disco sucked so bad it wasn't danceable it was old music. They played either old Spanish love songs or techno remixes that I believe you had to be on drugs to dance to so I didn't stay there long. The bartender there was nice and made great drinks. All in all I don't think I will go back there. I enjoyed Boca Chica but will stay somewhere else. A lot not all the staff cater to people of Russian decent. Nothing against them but as paying guest this divide should not be so obvious. I met some really great hard working staff members.