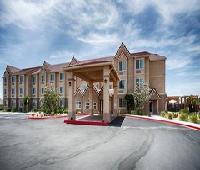 The room was clean and met all of our needs. It was very quiet and we were next to the elevator. The price was reasonable and the staff was very helpful and accommodating. We will be coming back. The man who checked us in was very friendly. I had accidentally booked a room one day more than I needed. He adjusted our price with no issues.

Large, comfortable room. Very clean. Friendly staff. Good breakfast with lots of choices. Close to Central Park and golf course. Most places to eat are a couple of miles away, towards the center of town.

Nice, clean and large room. Even had a large hot tub but we did not use it. Friendly staff. Air conditioner was noisy but we did not need it during the night. The king-sized bed was very good. The shower was not a tub but a step-in shower - very nice!

This is a surprising gem in California City. Comfortable, well-situated rooms.
I would not stay on the first floor facing the street again - was loud, and the hallway is echoey. But otherwise, surprisingly lovely and good, strong coffee for breakfast in the breakfast room.