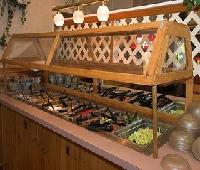 - Hotel year Built - 1972 Year Remodeled - 1992 additional Property Description - Peace And Quiet Can Be Found When You Get Away To This Jefferson, Nc Hotel Thats Conveniently Located Near Many Area Attra

- Hotel year Built - 1972 Year Remodeled - 1992 additional Property Description - Peace And Quiet Can Be Found When You Get Away To This Jefferson, Nc Hotel Thats Conveniently Located Near Many Area Attra

Had a great time and everybody there was so polite and respectful. Would be staying there Everytime we go to the mountains ! Clean rooms and nice beds ! Very close to nice restaurants and grocery store if you need anything

NC mountains lovely, but not the Days Inn in Jefferson

This Days Inn in Jefferson is located in a very pretty area of the NC mountains, and our family was eager to enjoy our stay while there on 10/20-10/22, 2017. Unfortunately, we found this motel to have poor value compared to others we've stayed at in the Boone area. When we had a strong burning smell from the HVAC unit, we called the office and were told that they would have someone Come fix it immediately. 1.5 hours later, with help a no show, we called back because the room was becoming cold. This time someone came with a portable heater. We also had poor or no internet wifi in this room, number 158. In the very early morning we were awakened by loud pipe hammering when our neighbor arose and took a shower. It was so loud and strong that the floor was vibrating. When we complained to management, they only gave a 10% credit.

Very unsatisfied. The WiFi was terrible, the a/c sounded...

Very unsatisfied. The WiFi was terrible, the a/c sounded like a truck was coming through the wall

First time staying in a Days Inn and it was for one night only. Had to wait for towels to "dry" in the dryer as the cleaning crew was busy cleaning rooms at check in time. Got the towels later on. In house restaurant that was advertised was "closed up" as the front desk said. He said they gave no reason just shut down the restaurant. Breakfast was sad and unless you wanted cereal or protein bars it was fix as you order by one male teenager who was not dressed for the job. Not very professional at all and we saw several guest leave without eating. Commode wouldn't flush so my disabled husband asked for a plunger and it was delivered to the room and handed to my husband for him to use. He didn't mind but I found this awful that the maintenance person didn't offer to unstop the commode. We had asked for shower chair since my husband has prosthetic leg and cannot stand in shower......none available....nor was there a handicapped room per the front desk or the website. Will never stay at Days Inn again due to these problems. It was cheap and I should have known better.

We stayed in this hotel for three nights while attending a 90th birthday party in West Jefferson for my husband's Aunt. Compared to the prices at the hotels in West Jefferson it was a real value. The rooms were clean. Good location for our many trips to West Jefferson over the weekend. We did have to ask for towels and toilet paper but I would stay here again.