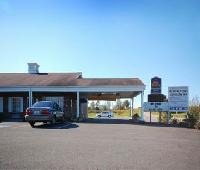 - Inn/Chalet year Built - 1968 Year Remodeled - 1999 additional Property Description - Looking For Adventure. This Cozy Cave City Hotel Is Located Near The Entrance Of Mammoth Cave State Park And All The Areas

- Inn/Chalet year Built - 1968 Year Remodeled - 1999 additional Property Description - Looking For Adventure. This Cozy Cave City Hotel Is Located Near The Entrance Of Mammoth Cave State Park And All The Areas

The price was right, but the room was not clean. We have two small dogs. We paid $10 each extra for them. I don’t know what they do with the extra money but it does NOT go towards any extra cleaning. There was a squashed bug on the wall and both the carpets and bedspreads were dirty. Our minerature schnauzers are well groomed and clean. Pretty sure they left dirtier than when we arrived.

Ugh. We will never visit a Super 8 again. Not only was it dirty, but there were bugs in the room, and by the pool. There were also dead bugs in patches of dust between doors that connected rooms.

I rate this property as a 10 out of 10! I've stayed here before when it was the Kentucky Best western, and this stay was just as pleasant. The rooms are very clean, and if I were to change anything, it would be a better offering for breakfast. But that is a minor issue. For the price, you can't beat this location.

Satisfied with our stay.

Beds were comfortable room was average but expected for the reasonable rate. Convenient to interstate.

The bed was very comfortable. Water pressure was great. Room was very clean. Friendly staff. Plenty of restaurants around. Easy access to the highway. Breakfast was good and hot so I was told. Only two complaints I have but there are not very big. One was that the breakfast bar only had one pair of tongs for the sausage, waffles, biscuit and eggs I couldn't eat any of the above because I have an egg allergy. The second pair of tongs were for the Danish and I watched a customer take the tongues and pick up eggs with it and put them back by the Danish. I told the morning staff member I think his name was Matt that he should wash the tongs and get extras for the hot food for people who had do have an egg allergy. He did take the Danish tongs and wash them and put them back out. The only other complaint was the toilet moved. I knocked into it in the dark and I slightly moved the toilet to the side. I told the morning man Matt about it before checking out. I would definitely stay here again.