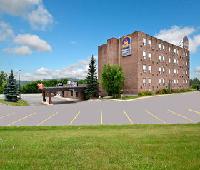 Only if you have to !

We stayed for one night in November and were not pleased but there was no other place to stay in Renfrew. We left the room to go for dinner and walked into a cloud of fumes from someone spraying Raid in the hall.
On our return after dinner we spent the next few hours killing over 15 flys that were in our room.
The towels in the bath were clean but very much in need of replacement as they were faded and very thin.
We would never spend another night here. Next time we will find something closer to Ottawa.

Only stayed, because. I other options!

Unfortunately, we had to stay at this hotel, because everything else in the area was full. I had read all the reviews and was concerned about the fly issue. But hoped for the best.

The fly issue was unbelievable, the window sills, in all the corners and bathroom were tons of dead flies!!! But the I looked under the bed!!! Wow!!! It had not been vacuumed in weeks I’m sure. Now when you have a problem like this you would think they would be looking at ways to fix the problem, not just vacuuming them all up. Like I said if we had any other choice I would have walked right back out and gone somewhere else, but we touched it out.

The night manager that was on duty(Friday, Nov. 3) was the hotels only shining light. She was super friendly and apologetic about the issues and came right up herself to clean up the flies. Can only imagine how many times she has had to deal with this!

Obviously there was a fly problem which is too bad because otherwise this would’ve been an enjoyable stay. There were flies everywhere. Dead and alive.

I don’t typically right reviews but I don’t think I have ever stayed at a hotel that was so dirty. I was supposed to be there 5 nights but left after 1, I decided to drive an hour each day instead to stay elsewhere.

Battle of the flies

The room was full of house flies. I gave up counting after I killers 30!

I left about 12 bodies in the window in the sill. They were still there after the room was cleaned.
For some reason the security door frim the outside to the second floor was taped open so it didn't lock.