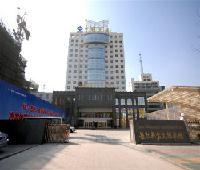 I stayed one night in this hotel. It was decent value for my money, because it is so cheap. But I can't really recomend this to anybody. Rooms are bit dirty. Breakfast is nothing but Chinese food. Good though, but if you are expecting western dishes, you'll get a surprise.

ROOMS
Standard hotel rooms with complete amenities. Up to par with Best Western standards. My room has updated furnishings already. Room temp was well regulated considering the weather outside was 8 degrees below zero.

LOCATION
Located at the city center, with a KFC and department store across the street.

FACILITIES
There was a gym/sauna mentioned in the website, but it was not operational during my visit.
Restaurant was good (50RMB for a Brazilian buffet...really good!), and I liked the breakfast buffet as well.

PRICE / OVERALL VALUE
Price was very good. Stayed for one night only for business, but overall I had a good stay. They could get some more english speaking staff though.

Overall, this hotel is quite good value for money. However, even by Chinese standards, it slipped from its four star ranking quite some time ago.

There are many things to like about this hotel. We booked the cheapest room on elong and it was big, comfy and clean with a 16th floor view. We ate at both the Chinese and Western restaurants. Food was slightly above average and very good value for money (48rmb for Brazilian meat buffet dinner ). The tariff also includes a hearty, mostly Chinese-style breakfast.

The problems we faced were not particularly annoying and pretty typical of hotels in China. However, if you expect four star, you won't be impressed. Be aware that the lobby bar, KTV and sauna/gym are either works of fiction or operate randomly. They were closed during the October National Holidays, traditionally the busiest time of the year.

The staff are pleasant and some speak good English but the ability to assist is lacking. We wanted to use a complimentary umbrella but, despite having paid a deposit when we checked in, we were supposed to leave our key as ransom. The concierge just threw our key in the drawer of his desk which was near the door. This hardly seems necessary for a 20rmb umbrella.

Staff were also unable to tell me where to obtain a foot massage since the hotel's sauna was closed. I found a perfectly adequate bathhouse within a ten minute walk.

Our bathroom was spotless with no mould, yet it still had a funky smell. I actually think something was wrong with the fan and it needed to be replaced/cleaned.

One morning when we went down for breakfast, it was chaos. Two buses of tour groups crowded the breakfast room, however, there were still seats available IF THE STAFF CLEARED AWAY PLATES. Things were so bad that people were simply piling towers of dirty plates in the middle of tables so they could make a space to eat. They were as unimpressed as us..

The hotel is about three blocks from the centre of town (Pengcheng Guangchang - Pengcheng Square). The number one bus outside the hotel, or an 8rmb taxi fare, will take you to the square and its Starbucks in five minutes. There is a KFC across the road from the hotel.

Xuzhou is not a particularly expensive city and there are probably better options closer to the middle of town or the tourist sites. The Home Inns were particularly well sited if you are just here for sightseeing. If you are a businessperson, I saw better business centers at the Bayview Holiday Hotel (just opposite this one) and the Garden Hotel.

Xuzhou is an interesting, developing city which has a lot to offer in the way of historical
sightseeing. We really enjoyed our visit, but would choose a hotel closer to the middle of town next time. Xuzhou Friendship Hotel is not a terrible choice by any means, however, their standards are not quite high enough given that there are more convenient, cheaper options.

As a footnote to this review, I would like to relate that when I checked out, I dutifully submitted the hotel's "Confidential" customer review form which I had carefully sealed. After much discussion, it was decided that the girl in charge of the "Business" desk would deal with my form. She tore it open, glanced at it, threw it in a drawer, gave me a shy smile and presented me with a pair of toenail clippers. Don't stay in room 1608. I doubt that anyone has been informed about the funky bathroom!...