Blue Marine Beach Resort is a well facilitated beach property having its own private beach in Varkala. It is located 2 km from the temple. The smoke free property houses 16 well furnished rooms across 2 floors. Guests can indulge in relaxing massage sessions, sip coffee at the cafe, stroll the gardens and have a delicious meal at the restaurant. Other amenities include free parking, free Wi-Fi access, laundry facility and currency exchange. 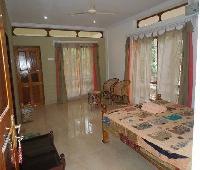 Blue Marine Beach Resort is a well facilitated beach property having its own private beach in Varkala. It is located 2 km from the temple. The smoke free property houses 16 well furnished rooms across 2 floors. Guests can indulge in relaxing massage sessions, sip coffee at the cafe, stroll the gardens and have a delicious meal at the restaurant. Other amenities include free parking, free Wi-Fi access, laundry facility and currency exchange.

Place was just awful the only redeeming feature what's the chap that took our passport details (I think he was possibly Nepali)seemed genuinely interested in our plans and if we were happy.

Booking on Agoda it stated includes breakfast but there is no restaurant here or at least wasn't when we were here.

When we asked the manager for the wifi code ( obviously wasn't working see pic even though we paid for wifi) he seemed more interested in putting his rizla together than help a paying guest.

Have a look at the pics of the litter lying around and the room (which was next door to the original one they offered us) where the staff held their nightly local lads party's.

No wifi
No restaurant
No breakfast

We stayed for two nights in the second floor large room with small outside space. Room was worn but good sense of space and clean. Views to the sea through the trees and the cafe which is a bonus in Varkala. Staff were friendly and welcoming.
Only problem was that at night there was a loud noise coming from the roof area above us. This started about 2am both nights and went on for hours. Even with ear plugs we could still hear it. We did tell the staff and there was speculations as to its source but we never found out what it was. In hindsight we should have asked to change rooms. Shame as the room was large, airy, fairly priced and in a nice position.

When we reached there, we checked the room before we finally checked in. Everything seemed fine.
What confused us at first was the fact that they charged all the money for the whole stay at the very first day. As we planned to stay anyways it was OK for us.
In the night my friend got again sick with stomach problems and itchyness (either an allergic reaction to the washing powder or bedbugs?!) The problem was also that the water was switched off in the night so going to toilet was no fun at all.
I was sick for many days before and it got worse that night....we told them that we would like to check out before and go to a hospital in trivandrum because we were also thinking to leave India earlier than planned since we were not well from the first day on.
They refused to accept our excuse and additionally they refused to give back our passports which they had from the day before to make a copy of it. Usually hotels make a scan or can give the passport back within one hour....Moreover they did not want to give us the money back.
Even though we were sick we had to fight hardly for our rights and they gave a dam about our health. I could have suffocated they would not have cared about it.
The hotel is okay and nothing special, so that only this would deserve 3 stars. But this incident showed that they care for nothing but their money. Money before health.

Nice, big and clean rooms with a balcony and view of the beach. Excellent location right on the north side of the cliff. The price is very fair, and Aji will help you with everything you need out of kindness (not trying to make money of you like in other places). We had an amazing stay. Very recommended!

Very bad room given despite showing nice pictures at time of booking.no flat screen t.v..it's just a small computer monitor.no heavy curtains,only sheer curtains forcing you to be early up.and no care is taken of your special request made before booking...just an eyewash ..not worth.
We can get better rooms in main line of hotels.this property is selling on due to sea side location publicity..very cold n unwelcoming staff..I truely don't recommend.