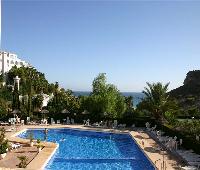 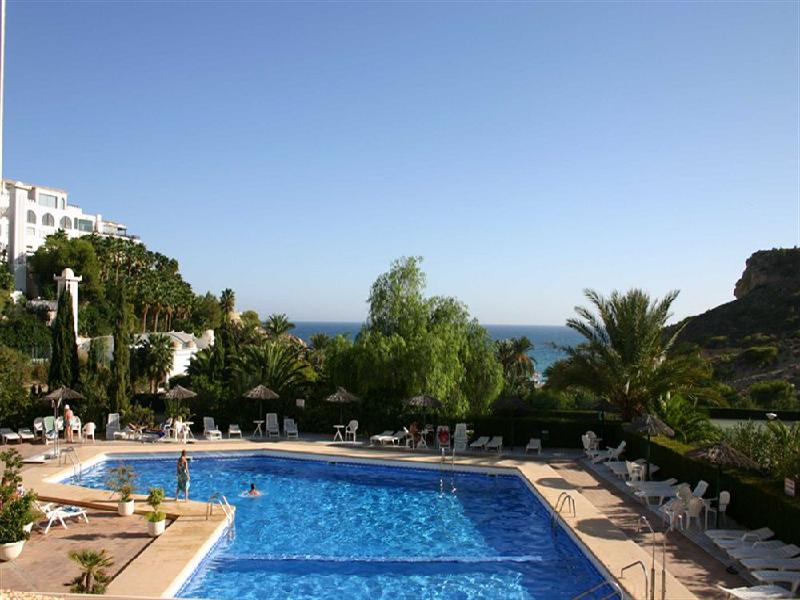 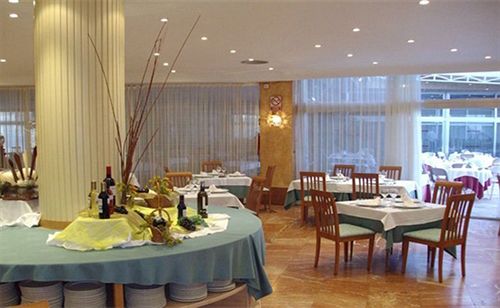 Property Location With a stay at Hotel Eurotennis in Villajoyosa, you'll be on the beach and close to Playa el Paraiso and Villajoyosa Seafront Promenade. This beach aparthotel is within the region of La Cala Beach and Terra Mitica. Rooms Make yourself at home in one of the 110 air-conditioned guestrooms. Windows open to sea and pool views. Complimentary wireless Internet access keeps you connected, and satellite programming is available for your entertainment. Bathrooms have shower/tub combinations and complimentary toiletries. Rec, Spa, Premium Amenities Dont miss out on the many recreational opportunities, including a nightclub, a health club, and an outdoor pool. Additional features include complimentary wireless Internet access, concierge services, and babysitting/childcare (surcharge). Dining Satisfy your appetite at the aparthotel's restaurant, which serves breakfast, lunch, and dinner. Dining is also available at a coffee shop/caf, and room service (during limited hours) is provided. Relax with your favorite drink at a bar/lounge or a poolside bar. Business, Other Amenities Featured amenities include high-speed (wired) Internet access (surcharge), audiovisual equipment, and currency exchange. Event facilities at this aparthotel consist of conference/meeting rooms, small meeting rooms, and exhibit space. 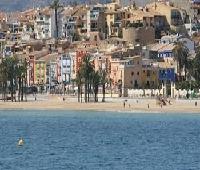 Property Location With a stay at Hotel Eurotennis in Villajoyosa, you'll be on the beach and close to Playa el Paraiso and Villajoyosa Seafront Promenade. This beach aparthotel is within the region of La Cala Beach and Terra Mitica. Rooms Make yourself at home in one of the 110 air-conditioned guestrooms. Windows open to sea and pool views. Complimentary wireless Internet access keeps you connected, and satellite programming is available for your entertainment. Bathrooms have shower/tub combinations and complimentary toiletries. Rec, Spa, Premium Amenities Dont miss out on the many recreational opportunities, including a nightclub, a health club, and an outdoor pool. Additional features include complimentary wireless Internet access, concierge services, and babysitting/childcare (surcharge). Dining Satisfy your appetite at the aparthotel's restaurant, which serves breakfast, lunch, and dinner. Dining is also available at a coffee shop/caf, and room service (during limited hours) is provided. Relax with your favorite drink at a bar/lounge or a poolside bar. Business, Other Amenities Featured amenities include high-speed (wired) Internet access (surcharge), audiovisual equipment, and currency exchange. Event facilities at this aparthotel consist of conference/meeting rooms, small meeting rooms, and exhibit space.

I booked 14 days B&B at the hotel, but 2 days into my stay the hotel announced they were closing the following Monday. Obviously this concerned me greatly, to say the least!. A girl on the reception, Chrisitina, attempted to translate the conversation between myself and the manager, who could barely speak a word of English. It was agreed, as the restaurant and hotel was closing, I would be moved into a studio apartment with a kitchen, and that the free wifi would continue, as would the maid service.

( A word about the dining room: at breakfast a number of small birds flew around the room. I'm a closet twitcher and love birds, but other guests were fairly shocked at the complete disregard for hygiene, not to mention the bird droppings around the restaurant. You can see one of the birds in one of the pictures I've uploaded ).

When I went to look at the studio, quite frankly I was shocked: the place was filthy, the floor hadn't been cleaned for a very long time, there was a 6 inch diameter hole in the bathroom floor, the cooker was simply a worn out hob, which would be condemned by Heath and Safety in England, the frying pan ( the sole usable pan ) was filthy and blackened with burnt food. The balcony floor was filthy and covered with bird droppings. Please look at my photos.....

I got very angry at reception and was offered another studio, almost as dirty and decrepit as the first, with the added "bonus" of 2 single beds instead of a double.

At this point, I rued the day I'd booked this hotel. The purpose of my visit was mostly business, in Benidorm, but I was looking forward to a few days R&R, but frankly the hotel closing simply ruined the trip, as it obviously would!

Just when I thought things couldn't get any worse, on the Monday the hotel was due to close, the wifi stopped ( apparently they hadn't paid the bill! ), which was essential to my business. And on Tuesday morning, the maid service stopped too.

I decided to contact getaroom, who told me as soon as I checked out they would investigate my claims, and attempt to get a refund from the hotel. To getaroom's great credit ( and as a result of their diligence ) several weeks after I returned I received 25% of my hotel cost refunded.

I think the least the hotel could have done was given me 50% of my costs refunded, but they simply dug their heels in, and didn't want to know. Basically the hotel sold me 2 week's B&B under false pretences: they knew they were closing, they knew they couldn't honour their agreement, but they still took my money.
I visited my local CAB and consulted a solicitor: they both said that as the hotel wasn't affiliated to ABTA, there was little they could do, except pursue compensation in the European small claims court, which can prove rather costly.

This hotel is in a beautiful location, however the management are obviously not to be trusted. Again I will say, they sold me 14 days B&B under false pretences.

Do yourselves a favour: if you're thinking about booking this hotel, check out my pictures and then AVOID!!!

6 days of sheer hell. Car essential. Not suitable for disabled.

Beds so hard they hurt my back and bruised my hips so couldn't sleep on my side. Was told to sleep on blankets under the sheet.Pillow flat as pancake (only one given). Had to request several more. Breakfast deplorable. Food was cold, far too salty, dried up and inedible. Birds flying around dining room eating from plates if left unattended. Food left uncovered with flies and wasps settling on it. Coffee horrid. Fruit juice like watery squash. Due to remoteness I was forced to pay for evening meal which was again inedible so I requested a refund after 3 days. Thereafter didn't eat for rest of stay except toast at breakfast, as nowhere to eat locally without transport. No english TV only Spanish. Nothing at all to do in evenings if alone. Hotel dead with no atmosphere. Excessively dark outside corridors to rooms. Far too remote. Not suitable for disabled without a car, which is essential. No local shops, bars, cafes or restaurants. No local entertainment of any kind. Too bad if you need a snack or chemist urgently. Bus is every 2 hours, not hourly. Last bus 19.30. Train nearly a mile walk to get to with no bus service to it. No Airport shuttle service in spite of being advertised. No luggage storage which was also advertised. Luggage kept behind reception in full view of public and no receipt given. No snack bar or café which was advertised. Staff said hire of mobility scooter is inadvisable as it would tip backwards when travelling up or down the long excessively steep hill to the hotel. Also range of battery would not get to local town or shops and back. Total waste of money - left there feeling drained and exhausted and in severe pain after 6 days trying to travel anywhere by inaccessible and/or non existent public transport..

Arrival, receptionist polite but reserved - I should think her job is spent dealing with complaints most of the time so I don't blame her for her lack of enthusiasm. Reception area lovely.

Such a shame a little of the room fees weren't reinvested into the place. Lovely location, great value for money and good sized rooms. We didn't expect newly decorated rooms for the money so that was perfectly adequate. However the Shower holder needed tightening so flooded bathroom trying to hold it while using. Toilet cistern coming off wall. Toilet roll holder broken. Wardrobe door coming off runner. Bed linen a sheet only, which was fine at this time of year. Some Light bulbs need replacing - especially the outside light- Thank goodness for the torch on the phone! These things wouldn't take much to put right. The elevator is a bit dodgy - we did get stick in it one night so we took the stairs that were not lit at all!

Having read some of the reviews we were expecting to have to eat out- it was really good- plentiful and full range of English (which I do not expect in Spain) and continental. Service excellent. The coffee was awful but every variety of juice available more than compensated. A few house keeping issues (i.e. Broken floor tiles) that could be fixed easily but overall couldn't have asked for a tastier breakfast.

The pool area is lovely, and if you play tennis there are about 12 courts!

I didn't look at the hotel website until after reading some of the reviews here, and yes that's quite a bit out of date as not much has been redecorated in quite a while!

For us, the peace and tranquility, the stunning views, great breakfast and large room suited our needs and was well under our budget.

We stayed at this hotel for a week.
The room was clean and Air Conditioning good. All balconies face towards the sea at various heights and angles.
We were bed and beakfast only.
Breakfast was fine , plenty of choice that you'd expect from any good hotel chain.
We ate evening meals in Villajoyosa so cannot comment on the evening meals e.t.c.
Bar prices OK for Hotel. 3 Euros for a large beer. 1.50 euros for a glass of wine.
Beach bar is in good as well which served snacks. We had a burger once and it was 10 Euros, food was fine. We only ate there once but other food we saw looked good as well.
There is a bus stop outside the hotel with a mini bus into Villajoyosa every hour at 15 minutes past the hour. Price is 1.80 euros per person. Note though you have to go to back of bus and press button when you want to get off. When you go over a bridge with a small valley underneath containing pathway and river down to sea is when to do it.
Hotel is very Spanish so communication can be 'interesting' some times but usually managed to get the message across eventually.
Villajoyosa is also more Spanish although most restaurant owners seemed to speak English. Beach and promenade very nice and obviously a little quieter than you would expect from Benidorm just up the road, but plenty of Restaurants / Bars.
There is a tram stop about 15 minutes walk from Hotel depending on your fitness level (I am an averagely fit 53 year old). But we didn't use it as we were quite happy where we were. Did walk into Villajoyosa one day but you could only do this on a cooler day.
Hotel pool was Ok but not that big so could be a bit crowded, the Hotel does have it's own private beach so you can get away to that if you want it quieter. We didn't use the sun loungers by beach as you can find areas to place a beach towel for free.

Lovely hotel for a peaceful break. Clean n staff were nice. It is a bit isolated as in everything is a quite a bit of a walk. However taxi service is fab. Villajoyosa town is 11 euro away and is a beautiful cove with restuarants n shops. Benidorm is 26 euro away. We had a fab time x