Extremely quiet three bedroom apartment for rent in Rome; on the first floor of a residential building with elevator; garden and private parking in Trieste Nomentano district. 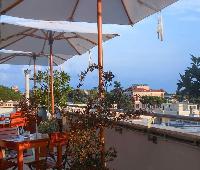 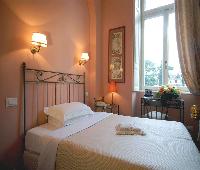 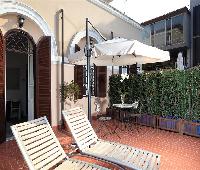 Extremely quiet three bedroom apartment for rent in Rome; on the first floor of a residential building with elevator; garden and private parking in Trieste Nomentano district.

The only thing nice about this hotel is the staff. The rooms are very old and tired. A group of us stayed in separate rooms and there was mold on some of the walls! The doors do not appear very secure and the lobby area is largely unmanned with keys hanging by the door. I would not stay here again. Really needs refurbishing.

We paid 52 euro for 2 persons. Location is good, but we could hear every footstep of other guests on the stairs and in the rooms. Quite a simple basic hotel.

Just for one night

We spent just one night at this hotel, and I wouldn't like to stay there any longer. Rooms are opened and closed with a key. And, as a commentator has noted above, everyone can enter to the area of rooms, so I think it's not safe.
The room had an odour, it was equiped maybe ten years ago. The door of shower room seemed all dirty around the handle, I doubted if they clean the doors and handles at all. Or it's time to paint the doors?
The bed was comfortable, but there were only sheets, blankets had no slip-cover. Personally, I cover my head when I sleep and with a blanket with a sheet under it it was just no possible to do that. I couldn't sleep almost all night even though I was very tired, it drove me crazy. And the blankets are no good at all, the owners of the hotel should change them all.
Hotel's situation is very good, in town center. There is no parking, we found a place to park easily because we arrived late in the evening. But we had to pay the price of parking, from 9 a.m. till 6 p.m.
In conclusion, I wouldn't come back to this hotel.

Smack in the centre of town and just minutes from the Chateau Ducal, the main shopping streets and the Port. Excellent value for money, the breakfast also. OK so the rooms are not exactly luxuriously appointed, there is no lift ( and we were on the third floor1), the hot water seems to run out in the early evening. and parking in the square opposite requires a bit of luck and some perserverance. The good nature of the staff, the location and the excellent value more than compensates.for these few shortcomings

Central, but has problems...

By name, by nature. This hotel is right by the centre, two minutes from Caen Castle, five from all the centre and around 15 minutes from the train station (on foot). Very well placed. So far so good, then the little things kick in.

The bathroom is tiny. I mean really tiny. Getting dried after a shower becomes a challenge by itself.

The language barrier with one (out of three) of the proprietors/doorpeople. Two speak English, one doesn't. they are all on seperately - so at times there is no English speaking. Not a problem personally, but it could be for some (especially with some of the later issues).

Next up, security. Being a central area, it was in a very slightly iffy area. No real problem. But there are a few little things that make you uneasy. There is no safe in the rooms or in the hotel. The stopping of intruders is that anytime anyone enters the hotel a bell rings and the proprietors try and poke their heads around the corner in time to make sure you are a resident. If they missed you, so be it (and I made sure they missed me on numerous occasions). Just a little worrying when you are carrying large amounts of holiday money.

Finally, the car parking. On booking.com it states that parking is available outside the hotel for E4.00 per say. This is a bit fantasy land. Firstly, there is parking, but it is always full. By chance alone we managed to get a space on arrival (someone pulled off just as we arrived). This parking was E2.00 for one and a half hours, and you could not get any more than this without returning every hour and a half. In reality there is no long stay car parking at the hotel. You have to park at the castle car park at E8.00 per day*, a few minutes away (once you find the thing in the one way system).

This could improve as a hotel with a couple of additions: a hotel safe, directions to the long stay car park around the corner and a minibar/fridge would be top of my list. At the moment though, it is nothing special, but as cheap as you are going to get for where it is.

*The long stay car park does not take English credit cards and requires payment in coins. Can be problematical when it is E24.00 in total.