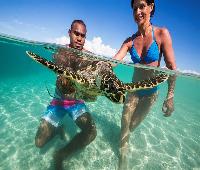 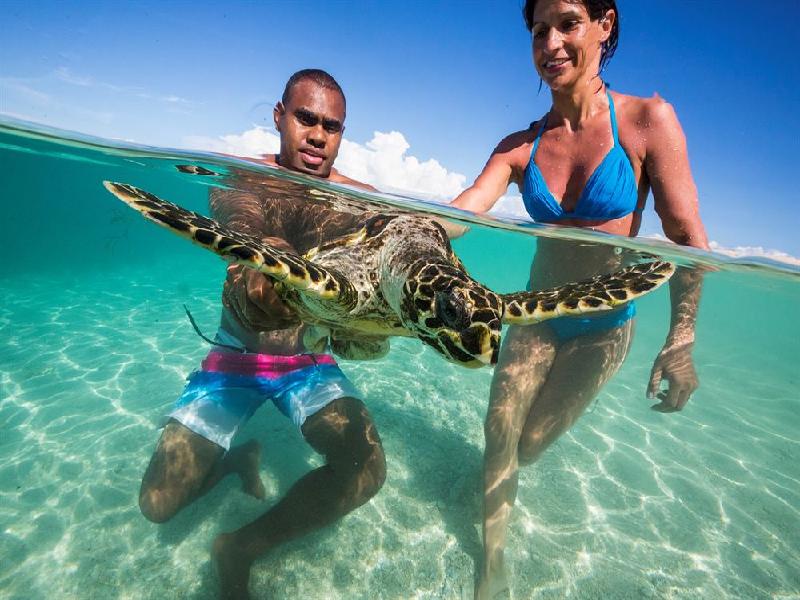 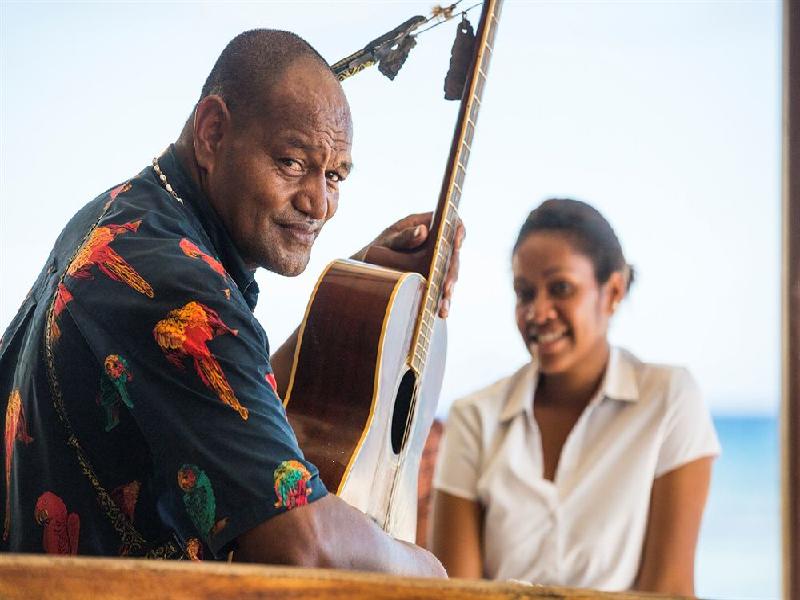 Property Location With a stay at Bounty Island Resort in Bounty Island (Mamanuca Islands), you'll be within the region of Denarau Golf and Racquet Club and Port Denarau. This hotel is within the region of Wailoaloa Beach and Churchill Park. Rec, Spa, Premium Amenities Take time to pamper yourself with a visit to the full-service spa. You can take advantage of recreational amenities such as a nightclub and an outdoor pool. Additional amenities include an arcade/game room, a pool table, and tour/ticket assistance. Dining Enjoy a satisfying meal at a restaurant serving guests of Bounty Island Resort. Relax with your favorite drink at a bar/lounge or a poolside bar. Business, Other Amenities Featured amenities include audiovisual equipment and laundry facilities.

Property Location With a stay at Bounty Island Resort in Bounty Island (Mamanuca Islands), you'll be within the region of Denarau Golf and Racquet Club and Port Denarau. This hotel is within the region of Wailoaloa Beach and Churchill Park. Rec, Spa, Premium Amenities Take time to pamper yourself with a visit to the full-service spa. You can take advantage of recreational amenities such as a nightclub and an outdoor pool. Additional amenities include an arcade/game room, a pool table, and tour/ticket assistance. Dining Enjoy a satisfying meal at a restaurant serving guests of Bounty Island Resort. Relax with your favorite drink at a bar/lounge or a poolside bar. Business, Other Amenities Featured amenities include audiovisual equipment and laundry facilities.

My husband and I were scheduled to stay at Bounty Island for 4 nights in October after staying at a very nice resort for 4 nights in the Yasawa Islands. To be fair the resort we stayed in on Naukacuvu Island was incredible and probably soured the well a bit. But in all honesty there were very few things that went well at Bounty Island. The island itself is nice-sized and the beach was lovely. However, the property in general including the eating area and accommodations are tired, blighted, and dirty. To be honest I'm not quite sure how this place gets 4-star and 5-star reviews - we live in San Diego and travel to Mexico quite often. Even the oldest, most run down places that we've stayed in in Mexico were better than our stay at Bounty Island.

We arrived on the afternoon Yasawa Flyer and were greeted by friendly and happy folks. So far so good. We were shown the captive Hawksbill turtle ponds where they hatch turtles and raise them until they're old and large enough to be released and survive with less chance of predation. Pretty cool. However, we pointed out that one of the turtles had a bloody eye that appeared to have been injured by either a bird or fellow turtle. As biologists we both realize that these types of injuries can happen whether the animal is held captive or in the wild. However, I do think medical treatment is needed in cases like this where an animal is clearly injured in captivity. But oh well. We soon learned that this was the least of our issues. We moved on to what we hoped would be a better horizon. After getting our room key we were instantly greeted by Berry who explained the resort rules, activities, dining schedule, etc. to the folks checking in (there were 4 of us including my husband and I). He was nice and very friendly. Then it was time to make the trek to our room. Berry explained that they had 25 staff on the island to clean the rooms, cook, lead activities, etc. But nobody was available to assist with our luggage. Now I don't mean that in a snotty way - I can handle my own luggage and did. And my husband normally can too. But on this trip my husband was recovering from major back surgery and he had to carry his luggage down a sandy path to our bure. The luggage could not be wheeled down to the bure on account of the sand. By the time we made it to our room my husband was in quite a bit of pain. It just seemed odd that nobody could help us out - we even passed a crew of folks playing soccer! Berry was carrying the luggage for the other guests which made sense because they were older ladies. But still - we could have used a little help as well.

Now on to the accommodations themselves. We reserved a beachfront bure with air conditioning - the deck and personal outdoor hammock was a very nice touch. But the rest of the bure was run down and in need of some TLC. One, many window slats were broken and/or wouldn't close, pretty much rendering the air conditioning useless. Plus the broken windows were an open invitation for bugs, mosquitos, etc. Pretty disappointing. The floor was dirty and the bed was uncomfortable. They pushed two twin beds together to make one large bed but the seam down the middle was very uncomfortable and formed a kind of berm between my husband and I.

The bathroom door had a gate-like lock on the bedroom side of the door. Not sure why you would need a lock on the outside of the bathroom door but so goes it. The bathroom windows had no glass, just screens, which wouldn't be a big deal except the bedroom and bathroom are separated by a divider - the wall doesn't extend to the ceiling. So hot air from the bathroom would make its way into the bure again rendering the air conditioning useless. The bure itself had one fluorescent light to illuminate the entire bure - at night it was very depressing and reminded me of what it might feel like to sleep in a jail cell.

Dinner was not good. They served a three course meal with soup, a main entrée, and dessert. In all fairness, the soup was not bad. We both selected the creamy chicken pasta for our entree - when it arrived it was swimming in a gray gravy sauce that was reminiscent of gruel. The chicken bits were loaded with bone fragments. I'm serious - there was not a single bite where I wasn't spitting out small chicken bones! Not pleasant and pretty disappointing. When asked if we wanted dessert we both said a resounding "yes" but dessert never came. The kitchen walls were smeared with dirt and in general looked filthy. The atmosphere certainly didn't lend itself to an appetizing dining experience.

We decided right then and there to leave Bounty Island but given the boat schedule we had to stay the one night. The front desk staff was super nice and agreed to let us stay in a deluxe bure for the night in order to help my husband have a better night sleep on account of his back. The deluxe bure was a step up from the standard bures in that they largely had solid windows (so the air conditioning worked more effectively) and more fluorescent accent lights.

So we paid $25FJD for 24 hours worth of internet use, ordered some beers from the bar (good prices by the way) and ended up booking our remaining 3 nights at Treasure Island.

I've stayed at a wide range of accommodations throughout my life from campsites and truck beds to hostels, casitas, and basements in Mexico and I have to say with sincerity that Bounty Island was the worst accommodation to date. If we had travelled here in our early 20s and we were on a low budget with few expectations this place probably would have fit our needs. But we're in our 40s now and this resort was just not a fit for us.

Good food But the rest of it - very poor

Compared to other islands bounty was very disappointing to us. The surrounding area was pretty dirty and messy. The bathroom kind of old. To be fair bounty island has some good activities and good food.

We have just returned from our best holiday ever! We stayed on Bounty Island for 4 nights in a Beach Front Bure with our 10 month old baby.

The Bure was basic (as you would expect at such a low price) but had all the amenities we required - air conditioning, kettle, fridge. We had our own sunbeds and hammock from which to take in sunrise at 6am. The view from the deck was STUNNING! It really felt like paradise.

The all inclusive meal plan was great value for money, the food was plentiful and delicious. Beers and soft drinks were reasonably priced and there are 3 happy hours a day - you can't argue with that! We loved the evening entertainment and the heartfelt goodbye that we received on our last night.

The service that we received on Bounty Island was outstanding. The staff were all so friendly and made us and our baby feel so at home. Special thanks to Nemani, Netta and Berry, unfortunately we don't know any other names, but you were all brilliant.

Thank you Bounty Island for a wonderful holiday, we'll be back and will recommend you to all our friends and family.

Had a really nice couple of nights here in October - the pool is lovely and the cocktails of the day are cheap. On the first night we had a lovely a la carte dinner, the second evening's lovo dinner was ok. The only downside was lots of day trippers which detracted from the otherwise tranquil atmosphere.

We stayed here for 3 nights, 2 of them in the dorms. They were very clean and the bathroom was in the same facility, we found it perfect. The dorm has AC, the mattres weren't that comfy, really thin foam. The bunks beds were one per person.
The stuff was really friendly and often sing and play the guitar whilst you are having dinner which is really nice. The food was good, breakfast and lunch as buffet and a la carte dinner.
There's lots of free activities to do on the island, like snorkelling, kayaking, paddle boarding, swimming pool, turtle feeding, fish feeding and ping pong.
The island is so tiny you can just walk around it in 40 min (Fiji Time!).
We cant be more gratefull with the staff, we had a problem with our next reservation and they decided to give us a private room for the same price the next place we were going (that was so much less than their prices)
Bounty island is a lovely place to forget everything and just relax!