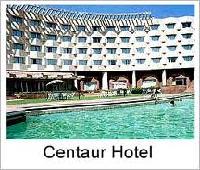 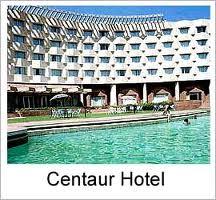 Strategically located close to the international and domestic airports, this 4storied hotel with 4Star facilities is a business-cum-leisure hotel, shaped like a star and constructed in white and red Jaipur stones. There are 376 elegantly furnished guestrooms. Guests are served complimentary breakfast and are offered scrumptious fare at the in-house restaurant. The property is maintained with a garden space and a fitness center, ideal place to work-out a sweat. 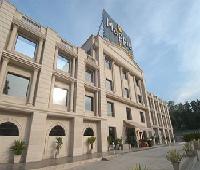 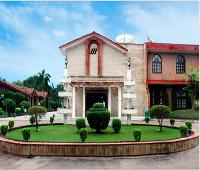 Strategically located close to the international and domestic airports, this 4storied hotel with 4Star facilities is a business-cum-leisure hotel, shaped like a star and constructed in white and red Jaipur stones. There are 376 elegantly furnished guestrooms. Guests are served complimentary breakfast and are offered scrumptious fare at the in-house restaurant. The property is maintained with a garden space and a fitness center, ideal place to work-out a sweat.

Cancelled flight. Was booked to this concrete dinosaur by Air India.

Happy from the beginning. 5 star sounds good. But they told me a lie at the airport....it was maybe a five star back in 1971.

Looks like something from old Russia. Dirty facade and shabby garden.

A non working metal detector in the entrance where the guard forced us to walk through .y

The lobby is cool. I think Kim Jong Un would be impressed. Feels like North Korea.

The procedure at the desk was a joke. All by hand. No computers and a lot of document to fill in. Maybe I bought it? Took over one hour to get the room,

The room was sort of ok. I can't say it's the worst I slept in but far away from a five star. I give it 2. Wifi is distributed by a 14.4 modem from 1994 that is shared by everyone.

The food in the restaurant is a story for itself.

I asked for the menu. It never came. The stupid man that served me told me he could arrange Biryani. Hey....I don't want biryani . I want to see the menu. He nodded he's head and told me he could fix biryani with or without chicken. And a youghurt for the inconvenience that he only could offer biryani....

The food arrived. Biryani is ok. Raita youghurt was ok. Not better than an biryani in the canteen in school but hey....it's at least food.

I wanted to eat my food alone. But this man standing beside me and talking and asking me lots of questions all the time. Disturbing .

Wanted to change some money at the desk. They have a exchange rate info at the wall with the rates. But not working. They don't have permission to change said the desk guy. Once again....a five star ...haha.

The hotel has not seem maintenance since it opened.

Fawlty Tower is superb comparing to this.

Will I return? No way!

I can recommend you to stay here, just for one reason, you will never ever again have a place to stay that is worse than this. It's on a travelers bucket list to stay here. You will always win in discussions about bad experiences of hotels between your friends.

How the heck can it be legal to destroy a place like this? It should be taken over by Marriott or something. Just blow out everything and start over again. This is a mystery and a lesson how government runs business.

A business idea to arrange tours to this place. Catastrophic adventures!

This was once a splendid hotel that has degraded over time. Efforts to improve mean there are some superb rooms and some awful ones. We were a group - a friend and I stayed in a lovely first class room that was clean and very comfortable with all expected amenities. My friends stayed in a room they refused to use the kettle in and had cockroaches. Hotel is close to the airport, which makes it convenient. Shuttle bus just outside the hotel grounds.

rated 5 sterns worth one stern

I had to stay at this hotel as I missed my flight due a delay from Air India. Air India booked me the hotel room to stay over the night and wait for the next flight. I was assured that it is a 5 stern hotel, I would only rate one stern. I arrived at 4 am in the morning there, had to wait at the reception for half an hour as they don't have any computer and have to fill out a lot of forms before you can get a room. The food was very poor quality, only four different dishes to select from. The interior, the rooms, the shower, everything is dirty or broken, the personal very unfriendly. The corridors are very noisy as you have to bang the room door in order to close it. The airport is very near, you hear all the time the airpains landing or starting.

One of the worst Luxury Hotels I have ever come across. Nothing is good about this Government property run by Air India and faster it is sold off to private management better it will be. We were put up by Air India due to delayed flight and subsequently missing our Air India flight to Chicago.
Wi-Fi is free but no coverage, Breakfast, lunch and dinner was all buffet with no choice. Not just we were free guest but for everyone. There was no provision of room service. It can be best described as "Dharmshala".
It has all facilities Bar, Coffee shop, Chines restaurant, Indian restaurant, swimming pool, etc but all nonfunctional.

Only because I can't rate it ZERO

I have traveled to over 100 countries and stayed in over 300 cities in my travels. The CENTAUR HOTEL is BY FAR THE FILTIEST, DISGUSTING, SMELLIEST HOTEL ON THE PLANET!! I have never stayed in a worse hotel. The paint on the walls and ceilings are stained and peeling off. The smell of insecticide is enough to make you sick. The place is infested with cockroaches and crawling with lizards. The bathrooms are purely sickening. I took my shower with the three two-liter bottles of water I brought with me.

This hotel was so bad I will never travel back to India. Ever. If you plan to stay here you are making a serious mistake that could actually damage your health.