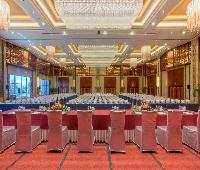 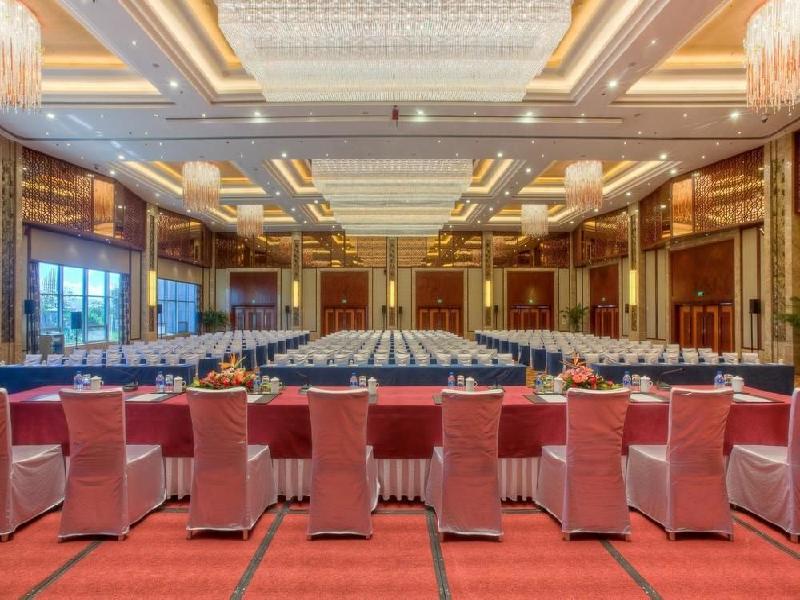 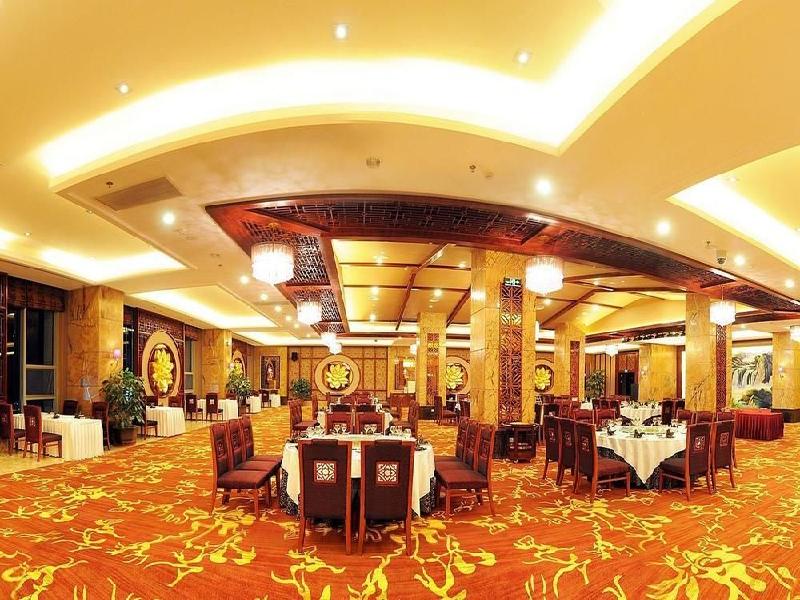 Property Location You'll be in Baoshan (Tengchong) with a stay at Empark Grand Hotel Of Tengchong. Rooms Make yourself at home in one of the 868 guestrooms. Complimentary high-speed (wired) Internet access keeps you connected, and satellite programming is available for your entertainment. Conveniences include phones and wake-up calls. Dining While enjoying a refreshing dip in the hotel pool, you can order your favorite drink at the poolside bar.
Business, Other Amenities Featured amenities include a business center, dry cleaning/laundry services, and a safe deposit box at the front desk. This resort has 3 meeting rooms available for events. Free parking is available onsite.

Property Location You'll be in Baoshan (Tengchong) with a stay at Empark Grand Hotel Of Tengchong. Rooms Make yourself at home in one of the 868 guestrooms. Complimentary high-speed (wired) Internet access keeps you connected, and satellite programming is available for your entertainment. Conveniences include phones and wake-up calls. Dining While enjoying a refreshing dip in the hotel pool, you can order your favorite drink at the poolside bar.
Business, Other Amenities Featured amenities include a business center, dry cleaning/laundry services, and a safe deposit box at the front desk. This resort has 3 meeting rooms available for events. Free parking is available onsite.

Housekeeping ignored DO NOT DISTURB sign and went in to clean the room... Luckily I didn't leave any valuables on the table.

Hotel breakfast provides coffee in a pot. However it is instant coffee...

It has a five-star plaque issued by the Chinese Tourism Authority. But if you consider Sheratons and Hiltons to be four diamonds... You see what I mean?

It was great until we had plumbing issue

We were vising Tengchong in July 2016 and stayed at this hotel for 2 nights. It was grand indeed: the room was clean; washroom was clean (a first for many hotels I stayed in China); breakfast was excellent. All was excellent until our drain was plugged and our washroom was under 2 inches of toilet water in the morning. Called the front desk, and they sent someone to clean the room, didn't offer us a new room, but said they would have the drain fixed. The room was clean and dry when we came back from our day trip; then the same thing happened the next morning! Called again, and asked to speak to a manager. The first thing she said to me was "but you are leaving today", so why are you bothering me if you are checking out? Not even a word of sorry, didn't offer any compensation. I had to ask her to open a different room for us, so we could shower. Totally unacceptable!!!! They don't speak English very well, so you better have google translate working or you might not get to anywhere with them. None smoking doesn't exist in China. The none smoking signs you see in hotels and restaurants are a farce. People will light up when and where they want to, even right under the no-smoking sign.

A lesson still to be learned.

Arriving at Tengchong airport after the 50 minute stopover flight from Kunming in Yunnan Province was a pleasant enough experience. The air was fresh, the surrounding hills around the airport on a plateau covered with lush forest, the incoming flight went without a hitch, the landing was smooth and professional on this China Eastern's flight. As soon as we entered the air terminal a few steps away, our checked in baggage was already there. With suitcase, we proceded straight to an awaiting taxi and gave directions to the hotel. As we were about to depart, a few young men in suits seeing to the general functioning of things taking place in front of the airport indicated to my driver that one more passenger would enter my taxi. We found this curious, as several free taxis were available to take passengers downtown. A young lady entered the cab, her suitcase and cardboard box were loaded into the trunk by the helping young chaps in suits, and off we went. The driver left her off first, at an address in the center of town, where her family received her with happy greetings. Having witnessed this happy family reunion, we finally continued to what I understand to be the original mission of this ride, our hotel. Total fare was 43 RMB according to the meter, the driver asked for 70 RMB, and I gave him 50 RMB. The next group of courtious young men in suits, the guys who received us as the taxi pulled up at the hotel, explained to my inquiry that people in Tengchong are somewhat informal regarding this sort of thing, and that it is quite normal that people share taxis. Fine by me.
The Empark Grand Hotel is every bit grand, the lobby is spacious with an immense wood carving, circular fountain and restaurants. The hotel itself as four seperate towers of some twenty floors each. When checking in the spacious lobby, we were asked if we wanted a non-smoking room. Of course we do. This was given with the comment that the only non-smoking floor is the 19th storey. I see.
We wanted to visit Tengchong for primarily three reasons. The first is the experience of seeing this part of south western China before it is changed by mass tourism which is truly on the rise in China. The second reason, the jade industry which is everywhere to be seen in Tengchong. Third, I often read about the encounters of the second world war in this region, and wanted to become acquainted with this recent history.
The people in Tengchong are among the nicest folks we have ever met. For five days, we wandered through town and the nearby Old City of Heshun, a true gem of a village still quite unique despite much renovation of local housing. The village offers several inns that are quite adequate for the traveller who wishes to have a good meal or stay in a clean room and board. We had a very tasty lunch in one of the taverns. We didn't stay in Heshun Old City, however, as our entire stay was already booked at the Empark Grand Hotel in nearby Tengchong, a short twenty minute taxi drive away from Heshun. The hotel lobby staff at the Empark were quick and professional in assisting with local travel arrangements, also arranging things with local taxis ready adjacent to the hotel. Everyone at the hotel were very polite, courteous, smiling and helpful. In a word, friendly.
A word to the Empark Grand Hotel management. Your service and staff are very professional and polite. I would come back gladly for this reason, above all else, when considering a future visit. However, a BIG minus is your smoking policy, which is disgusting, and quite probably illegal, as well. To my understanding, being a European, smoking in restaurants is illegal in China, as well it should be. Breakfast is served in the Empark Grand Hotel restaurant on the ground floor, which during the weekdays had a small six table area for non-smokers, with the rest of the huge buffet restaurant a smoking area. On the weekend, when more people stayed at the hotel, you elliminated the small non-smoking section completely! Nothing could be more distastful than to experience the nausiating cigarette smoke of few inconsiderate and rude guests smoking at the tables nearby. Incredibly, one fellow had the bad manners of grandly lighting up a fat cigar with which he proceeded to pollute the air for the family of small children at his own table, those families around him, and indeed the entire restaurant. How utterly inconsiderate, rude and bad manners. In Beijing, where I live due to my work, the air is among the most polluted in China, ie. in the world. At least in highly polluted Beijing, four and five star hotels have a no smoking policy in their restaurants (why smoke when you destroy your lungs and heart just by breathing the terrible smog and polluted air in Beijing?). The air in Tengchong, on the other hand, is clear, you can breath deeply and freely take in the sweet, fresh smell of surrounding flowers and forest. Why in the name of all sanity must the Empark Grand Hotel spoil this otherwise bankable experience and friendly atmosphere with its insane smoking policy. A pity.
A lesson still to be learned. Ban smoking all together in the Empark Grand Hotel. At least show basic courtesy to those people smart enough to wish to avoid the foul smell of inconsiderate smokers who rudely pollute the hotel restaurant for everyone else.

Apart from the cigarette smoke this hotel is truly excellent and would rate a 5.

Apart from the cigarette smoke this hotel is truly excellent and would rate a 5. The food is also very good. Very little English spoken. I would definitely return to this property.

Comfortable but can be great.

With this hotel having only just been opened, my fiance and I wasn't expecting miracles, but the greeting at the front desk lacked the smiles and warmth one comes to expect from a 5 star rated hotel. The bellman that showed us to our room, neither smiled nor spoke (even though my fiance is chinese) and we would have liked information on this magnificent looking hotel and the surrounding area. The room was well appointed, with a generous ensuite and view out on to the man-made lake. However, the inroom literature didn't match the reality. When the booklet said there would be a film projected against a fountain (in the middle of the lake), we were told it was still under construction. Disappointing. The meal was full buffet style and the staff (though not well-versed in english), were polite and courtious. I did have a shirt laundered, (and even though I was transferred through three different people) the response came in the form of two middle managers and the housekeeper on my floor to collect the shirt. This was returned in the alotted time. I'm sure that service will improve over time and am curious to see that movie projected against the fountain in the middle of the lake.