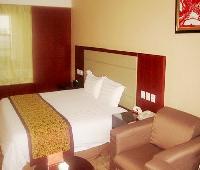 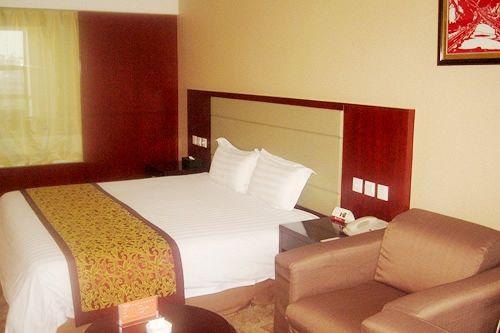 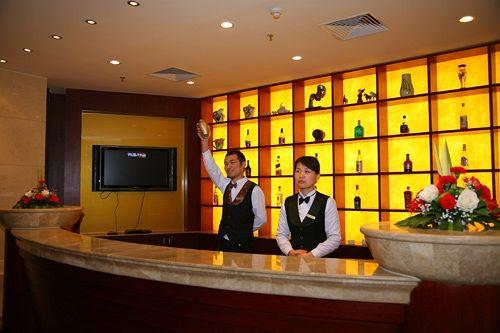 Similar hotels in Xi An

A hotel for the night

We spend only one night. The sleep quality was good as all other room amenities.
The breakfast was average and includes a Chinese cousin and a European cousin.
The quality of food was very average. It was good for a night.

A beautiful hotel, with good size rooms and ensuites. Bed very comfy, room very clean. Breakfast was excellent, with a good spread and good quality. Make sure you get a good fix of dairy products at the hotel, because when I was there it was almost impossible to find any dairy products outside the hotels. It was the same all over China. Staff are efficient and friendly, and can speak English reasonably well. We visited in October, so can't really comment on the air con. Our room faced the Wall, which lit up every night, so got great views! 10min walk to the Wall entrance, and a short walk to restaurants. Not much retail therapy to be had in this area.

Very comfortable, just too far from the old city center

Stayed here twice during transit between cities and both times got the same room. Our room 907 overlooks the front, which gets a great view of the city wall. The room by the window is triangular so it juts out and feels that much bigger otherwise, it’s a decent sized room. It was too bad the windows don’t really open and it was also very dirty and tinted making it hard to see.
There was free WiFi and a safe deposit box in the room. We had two queen beds and the room was fairly well-lit. The front desk does not provide plug-pins if you need to so make sure you have your own. Housekeeping leaves two free 330ml water free every day.

Slippers, coffee/tea making equipment was available in the room. In the bathroom were the usual suspects of toiletries like toothbrush/paste, comb, etc.

The shower has a shampoo/soap dispenser and one side is lined with glass and looks into the room. For privacy, you need to close the curtains to use the restroom/shower. The shower doesn’t drain very well as the slope of the ground isn’t steep enough to guide the water towards the drain fast enough. Add to the slow drainage, the shower door also doesn’t keep the water in. As the shower ground is nearly level with the rest of the bathroom, water seeps out into the bathroom if you have the water on full blast. This wasn’t designed very well.

The breakfast was so so. It looks like there are a lot of choices but there really wasn’t. The hotel is located on the southwestern corner of the city wall. To get to the center (Drum and Bell Tower) requires a taxi or the local buses.

I had stayed here at the former Sino Pearl Hotel in 2004, 2005 and 2006 as part of a Global Volunteer team. It had been upgraded to 4 star in 2005 which was a joke as nothing had changed except the additional 15% tax added and likely some type of bribe passed under a table to achieve this level. The hotel was adequate, the breakfasts were great and the staff helpful. There were some entertaining diversions in the hotel including an old fashioned men's spa where a guy rubs you down until your skin is raw, a foot massage center on the top level and a couple bars. At any rate, not a lot of complaints.

Earlier this month I stayed there for three nights and it was hard to recognize the place. Except for lacking a swimming pool, I would say the hotel is now almost a true 4 star. Everything has been upgraded with the exception of the aforementioned basement spa. The lobby has been completely remodeled in marble with a large fish tank added. The tea house has been eliminated in favor of opening up the lobby. The front desk is redone with a large map behind digitally showing the times of various cities around the world. Humorously, only Beijing was displaying the proper time with New York and Vancouver about 20 minutes different. The front desk seemed a bit confused when we checked in and it seemed like there were a lot of trainees. The hotel just opened a few months ago from a one year closing for remodeling so maybe they're still in shake down mode..

The rooms are totally redone and beautiful. As previously noted, the night view of the old wall is truly spectacular. Make sure to get a room on the east side. One specific thing I liked about the rooms was the abundance of electrical outlets. Most rooms never have enough for chargers, AC adapters, hairdryers and so on. (That reminds me...the bathrooms didn't have a hair dryer, we had to borrow one from the desk.) I did recognize a few of the managers from prior visits so there is some continuity. The breakfast is still great although the service seemed a bit sluggish.

For the money, about 500 rmb plus 68 rmb for the breakfast buffet, I'd say it's a good value. Xi'an is a major tourist stop. By the way, this neighborhood at the southeast corner of the city wall is not heavily touristed. Hence, there are some interesting smaller restaurants nearby, especially a good Sichuan type around the corner, and a Western restaurant, Small World, is within a reasonable walk across from the first south wall gate encountered. There are lots of decent cheap hair salons and small groceries. I'd say it beats staying where all the other tourist hotels are but yet not bad if you like to walk to get to the Bell Tower at the center of the old city. The east gate is pretty close and you can buy a ticket and walk the top of the wall there. Bicycles are available there too. There are always alot of interesting activities (dancing, opera singing, musical performances) going on in the park along the east wall. The park has been completely redone and everything looks great. Kudos to the local authorities for making Xi'an such a nice place to visit. Now, if they could just do something about the crowds during Golden Week....