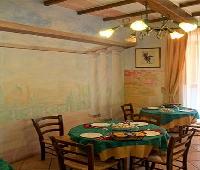 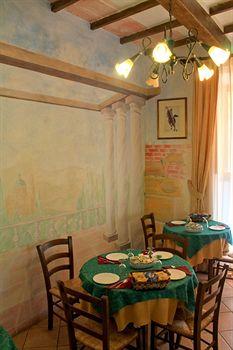 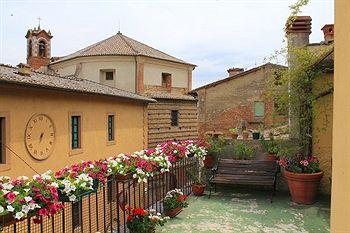 Property Location Located in Montepulciano (Val di Chiana), Hotel La Terrazza di Montepulciano is minutes from Consorzio del Vino Nobile di Montepulciano and Cantina Contucci. This hotel is within the vicinity of Archaeological Civic Museum and Chianciano Art Museum. Rooms Make yourself at home in one of the 14 individually decorated guestrooms. Complimentary wireless Internet access keeps you connected, and satellite programming is available for your entertainment. Bathrooms with showers are provided. Rec, Spa, Premium Amenities Take in the views from a terrace and make use of amenities such as complimentary wireless Internet access and babysitting/childcare (surcharge). Dining Take advantage of the hotel's room service (during limited hours). Business, Other Amenities Parking is conveniently located nearby.

Property Location Located in Montepulciano (Val di Chiana), Hotel La Terrazza di Montepulciano is minutes from Consorzio del Vino Nobile di Montepulciano and Cantina Contucci. This hotel is within the vicinity of Archaeological Civic Museum and Chianciano Art Museum. Rooms Make yourself at home in one of the 14 individually decorated guestrooms. Complimentary wireless Internet access keeps you connected, and satellite programming is available for your entertainment. Bathrooms with showers are provided. Rec, Spa, Premium Amenities Take in the views from a terrace and make use of amenities such as complimentary wireless Internet access and babysitting/childcare (surcharge). Dining Take advantage of the hotel's room service (during limited hours). Business, Other Amenities Parking is conveniently located nearby.

Great experience - like being a guest in a large country mansion

Our room was more like a suite, quaint, kitsch depends on your taste but it was fantastic, you really feel you are a guest in a home - Roberto and Vittoria cannot do enough for you. Great continental breakfast.
Short walk to main square at the top of the town or more shops and restaurants down at the bottom, if not already aware Montepulciano is all hills, therefore give it a miss if you can’t handle cobbled hilly roads and lanes.
As mentioned in an earlier review, difficult to find even with a GPS that has never let us down before, suggest getting yourself to cark park 7, then either ringing or as we did asking directions from locals and walking to the hotel 5 minutes up hill. Once you are at the hotel Roberto will drive you back to your car and then you follow him to the hotel – that’s an adventure in itself.

Great welcome by the host

It was difficult to find the hotel, as the navigation on Google map showed a route on restricted streets. We stopped at a parking area and called the hotel to get some help to find it. Roberto was very kind and came in his car to the parking area and showed the way so we followed behind in our rental car. I tried to follow the route on the map while my husband drove, in order to try to help others here on TA and the following is my conclusion of the streets we drove: We had stopped in the parking area where Via di San Pietro meets Via dell’Oriolo, on the southeast side of the old town. From there we drove south on Via di San Pietro, turned right into Via dei Filosofi, continued on Via dei Filosofi until we reached Via di Collazzi, where we turned right. Then we turned sharply left into Via di San Donato, right into Via Giordano Bruno, then left into Via Fiorenzuola Vecchia, right into Via del Teatro, then a sharp left into Via di Cagnano, which changes its name to Via del Piè Al Sasso after a short distance, and there you will find La Terrazza di Montepulciano on your right (driving north). La Terrazza di Montepulciano has an upper entrance/exit on Via del Piè Al Sasso (for going up to the main square, Piazza Grande) where the hotel parking is located, and a lower entrance/exit on Via di Voltaia Nel Corso (a pedestrian street with shops and restaurants). Roberto wrote a parking permit for us and then showed us around the hotel. He was very nice and hospitable, but he mixed Italian and English quite a lot so some things were a bit difficult to understand. His wife was also nice, but she hardly spoke any English and was even more difficult to understand.
We got a large room with both a bedroom and sitting room, and the entrance was from the roof top terrace (facing the upper street). The bathroom was average size, but the shower only had a shower curtain but no shower cabin, which made the bathroom floor wet when having a shower. There were large and good towels. We stayed in mid April during a couple of quite cold days. It was quite cold indoors too but we couldn’t find any way to switch on the heating manually (occasionally it seemed to be switched on automatically). The beds were quite hard and not so comfortable. The room was clean and wifi worked well.
Breakfast was served 8.00-10.00. Roberto started by serving croissants and offering us several types of cakes from a large plate (he proudly mentioned that they were made by his wife). He also brought a tray with different types of yoghurt, a small plate of ham and cheese and coffee/tea. The rest was already placed on the table: juice, water, a basket with a few slices of white bread, fresh fruit, pre-packed jam, pre-packed toasted bread and biscuits. There was no müsli and no vegetables.

We had a wonderful stay! Roberto was so accommodating and friendly. He helped show us around town and gave excellent suggestions for restaurants and things to do. We felt welcomed from the minute we got there. We loved sitting on the terrace and relaxing at night, highly recommended!!

This was a very odd stay for me. This will be a long review!

Getting there:
Montepulciano was very tricky to get to without a car. I booked tickets to Montepulciano Stazione and emailed La Terrazza for advice on how to get to the hotel (located in the old town) from the station. Roberto did respond promptly but unfortunately neither he or his partner speak very good English and the response 'stop train chiusi.chianciano taxi o bus for Montepulciano' wasn't quite as comprehensive as I had hoped for. I didn't have the wifi to email back and forth for any more info. I established that I should not go to Montepulciano Stazione as it is a long way out of town and wouldn't be easy to connect to the old town from there. I decided to follow the advice as I understood it and took the bus from Chiusi-Chianciano Terme station (located in Chiusi). There is a long wait between buses (between 1hr and 1.5hrs) and as my train was delayed I missed the 5pm bus and had to wait until 6:35pm. The bus stopped at a carpark in Montepulciano and then went further down the hill to the Autostazione (bus station). I'm not sure whether it would have been better to get off at the carpark but it seemed deserted and I had no way of knowing where to go. When I got the the Autostazione it was closed and the last shuttle bus had left for the old town at 7pm. Luckily a friendly man told me this so I called a taxi (+39 330 732723) which took nearly half an hour to arrive so I waited alone in the cold and the dark. The taxi was not marked or metered and was half dented in so the door barely opened but I was desperate to get out of there. Honestly, unless there is something particular you want to see in Montepulciano I would recommend sticking with more accessible hill towns like Orvieto of Spoleto. Montepulciano is very beautiful but the expense and effort to get there didn't seem worth it.

The Room:
I eventually made it to La Terrazza and was welcomed by a lady who lived at the top of the stairs (I think the wife of Roberto) who was very pleasant and carried my bag down the twenty(ish) stairs to my room. It had a frosted glass door which didn't feel very private and the room was tidy with gaudy decor. It may be some people's style but it isn't mine and I felt uncomfortably like I was staying at my grandma's house with odd little porcelain statues, tassled lamps and a frilly bed spread. The bathroom was more standard but the shower seemed old, was nearly on top of the toilet and had only a shower curtain which I always find unpleasant. It is an extremely quiet town so there was no noise disturbances at night. The free wifi worked well.

Breakfast:
The breakfast was served by Roberto who is very loud and genial. He certainly gave a nice taste of Italian hospitality but it can be a little confronting if you're not used to that sort of thing. I also jumped out of my skin a couple of times by him shouting to his wife up the stairs. The breakfast had a good selection and Roberto brought over options to chose from. There is also freshly made hot drinks. Check out was at 10am and they let me leave my luggage whilst I looked around town. La Terrazza is in a very good location on the hill and it is easy to explore the town from there. It is also well signposted around the town which is handy with all the little roads going up and down.

Getting away:
I came back to get my luggage and Roberto told me to exit down the stairs and then it is a five minute walk to the autostazione. I carried my luggage back down the stairs and then wandered around trying to find the exit. Eventually his wife was able to point me in the direction of more steep stairs which lead to the ground level. From there it was definitely not a five minute walk and the autostazione is very poorly sign posted. Fortunately I found a visitors information booth in a carpark and he instructed me to go through the park and down two lifts. I never would have found it had he not been there. Lucky I didn't plan my departure around a five minute walk!

Overall:
I think the proprietors mean well and are very pleasant but it would really help if they had some information available in other languages for those who are not from Italy and are not used to hill towns and won't have Internet or maybe even a phone when trying to get there. If you don't speak Italian it is very hard to figure out buses, shuttle buses and taxis. I have had other hotels in the region be far more helpful (e.g. Organising a cab to meet me) and that would have been great. It isn't a cheap hotel after all... the room wasn't my cup of tea but might appeal to those that like B&B type accommodation. I'm more of an introverted traveller and like to be a bit incognito. If you have a car, speak Italian and like the personal touch this would be great for you.

We had a nice room like a junior suite, but rooms are all over the world more or less the same. What's make the difference in my opinion is the attention of the staff and/or owners. In this hotel Roberto and his wife Vittoria make the difference with other places (I read this already before I booked the hotel) and it's totally true. Both do all to make your stay a very happy stay and if we return to Montepulciano we certainly return to their hotel.