Hotel Raunak in Pinjore has 22 well-furnished rooms with all the basic necessities for a comfortable stay. The hotel boasts of modern amenities like: business centre, air conditioning in public areas, luggage storage, elevator, backup generator, nearby parking, security guard, laundry services and a lot more. 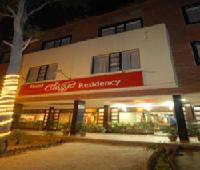 Hotel Raunak in Pinjore has 22 well-furnished rooms with all the basic necessities for a comfortable stay. The hotel boasts of modern amenities like: business centre, air conditioning in public areas, luggage storage, elevator, backup generator, nearby parking, security guard, laundry services and a lot more.

on internet rooms look ok. But in reality rooms are in a very terrible position.Bad sheets were dirty,bathroom were dirty,they gave used shampoo ,moisturizer bottles in bath room.When we complained about these used accessories in bath room,reply was they receive in the same condition from their supplier...never waste your money for this hotel

Stay was comfortable, Food was tasty. If you love Indian Food, its good place. Behavior of Receptionist was NOT GOOD. Room service was very poor. They forgot to put essential things in room, other wise Hotel was neat and clean.

Pathetic would be understatement. Hotel dissuades by claiming that it is 2 kms away from the railway which is nothing but intentional falsified information. It is almost 8 Kms, away from Kalka Railway Station. I am writing this review within three hours of my one night stay at this hotel. Waited at the entrance for almost 15mins for the house boy t extend his help for the help. Disgusted with the experience I helped myself with my luggage. Had booked executive room but it stinks so bad that I ended up suffocating myself. The smell is so bad because of open exhaust of a fast food kitchen directly to the room that I stayed in. The room is nothing more than a lodge and with unclean bathroom. With such horrible experience did not have courage to try food at the hotel. Won't share my comments on it.
Not recommended at all for family visit.

A good experience enroute to manali

I stayed here with my family while we were going to manali in march during holi vacation. .We reached here at around 9pm as we left delhi late for manali..going ahead to manali straight was not an option at that time..so we decided to stay in pinjore..We went to a couple of hotels but they all looked boozer's paradise. .then some1 suggested this hotel and we reached there..though we had to spend the night only,we tried a bargain with the receptionist but he was fix on his prices..We didn't liked him but then he offered free breakfast for the morning and we agreed..with the complimentary breakfast the deal became a good choice. . rooms were adequate and comfortable but only con about it was that we were accompanied by a couple of lizards. .tired of the journey and wanting to sleep,it didn't bothered much. .next morning we were offered alacarte breakfast which we took anti advantage of. .It was good too..though i would suggest 1 travelling to manali to take mohali chandigarh route but if some1 take this unfortunate way then I would say it is anytime better option to stay in this area when travelling with family before heading to manali as the way is most terrible one. .