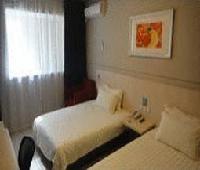 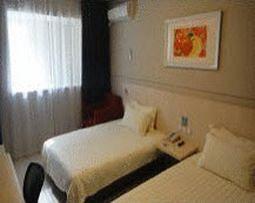 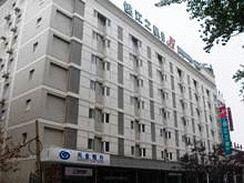 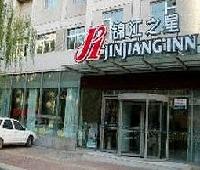 I stayed with JJ hotel for one night. It is not actually close to Luoyang Railway Station. You have to walk for 25 mins from Railway station to the hotel.

If you would like to travel Longmen Grottoes from Xi'an. This hotel is good for your stay because price and location. There is a bus stop right next to hotel. So you can grab taxi or bus to Railway to many tourist destinations.

Few restaurants around hotel but there is convenient store opposite the hotel.

Good location at a reasonable price

This hotel is located within a 15-minute walk from the Luoyang bus and railway stations. It offers basic amenities and is very clean and comfortable. The staff did not speak much English, but if you bring a phone translator or phrase book, it should help you get your message across. The one drawback to the hotel is that it's not located near many restaurants. The hotel has one, but it offered few choices. If you just need an overnight stay between trips, this is a great deal. A taxi from the hotel to the bus or train station costs 10 yuan, but it's better to avoid taking one, as they can be hard to find.

The staff were very friendly and helpful. There was one lady who was extremely nice, I didn't get her name.

We took taxi to Longmen Grottoes (CYN 36) and White horse temple (CYN 43) from this hotel and took buses back to the hotel. Due to traffic and some road restrictions, it took about the same time if you took buses which only cost CYN 2.

There was a farmers market nearby where I bought cucumbers, tomato and fruit, very fresh and about CYN 1 each. I also bought a roasted duck and traditional Chinese bread nearby for dinner, delicious.

The bathroom needs to be scrubbed and cleaned more. The shower floor mate was not clean. However the bedroom was decent.

Drum show outside your window

I have always heard that the Jinjiang Inns were a moderately priced chain that offered decent rooms and not wanting to spend upwards of $200 for the Christian Hotel, I gave this branch a shot. The room was not swept well, there were strands of hair on the bedroom and bathroom floors. There was also drumming going on right outside the hotel until about 10 p.m. I later spied the culprits: three or four elderly ladies drumming away and singing atonally like Betty White in the movie "The Proposal". Not sure if they were selling something or not.

I communicated with the staff in Mandarin and they were very helpful. I skipped breakfast, it didn't look appetizing. The hotel is only two and a half blocks from the train station and the long distance bus station which is a major plus. The hotel is also two and a half blocks from a shopping mall at Jinguyuan and Tanggong Streets which is a food mecca with a Korean restaurant, hotpot places and even a Dairy Queen. There is a Chinese restaurant called Qi Yuan Can Yin which is even closer at the intersection of Jinguyuan and Jian Kang Dong Lu where surprisingly they have Chinese spare ribs and hot and sour soup which are terrific alternatives to water banquet torture.

Overall I would probably try to find another place to stay but if I only had one night in Luoyang I might grin and bear it and stay here again. At less than 300 rmb you do get what you pay for.

About what we expected

Fair deal for price, small but functional room, could have been cleaner . Staff very limited English but friendly and helpful. Breakfast Chinese only; no coffee (or bread or juice). Location ok for train/bus; but a bit of a hike to downtown, restaurants, etc.