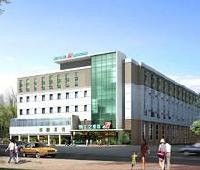 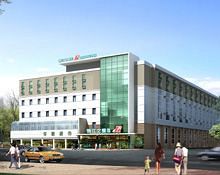 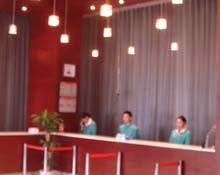 Property Location A stay at Jinjiang Inn Shanghai Lujiazui places you in the heart of Shanghai, convenient to Dongjiadu Road Ferry Wharf and The Bund. This hotel is within close proximity of Dongchang Road Ferry Wharf and Shanghai World Financial Center. Rooms Make yourself at home in one of the 247 air-conditioned guestrooms. Windows open for fresh air and city views. Complimentary high-speed (wired) Internet access keeps you connected, and cable programming is available for your entertainment. Private bathrooms with showers feature handheld showerheads and complimentary toiletries. Dining Enjoy a satisfying meal at a restaurant serving guests of Jinjiang Inn Shanghai Lujiazui. Business, Other Amenities Featured amenities include complimentary high-speed (wired) Internet access, complimentary newspapers in the lobby, and dry cleaning/laundry services. Free parking is available onsite. 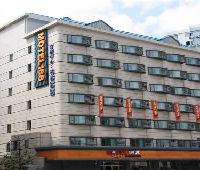 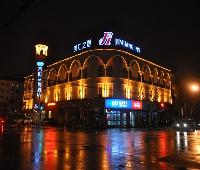 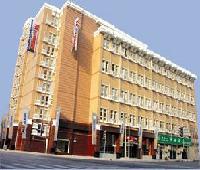 Property Location A stay at Jinjiang Inn Shanghai Lujiazui places you in the heart of Shanghai, convenient to Dongjiadu Road Ferry Wharf and The Bund. This hotel is within close proximity of Dongchang Road Ferry Wharf and Shanghai World Financial Center. Rooms Make yourself at home in one of the 247 air-conditioned guestrooms. Windows open for fresh air and city views. Complimentary high-speed (wired) Internet access keeps you connected, and cable programming is available for your entertainment. Private bathrooms with showers feature handheld showerheads and complimentary toiletries. Dining Enjoy a satisfying meal at a restaurant serving guests of Jinjiang Inn Shanghai Lujiazui. Business, Other Amenities Featured amenities include complimentary high-speed (wired) Internet access, complimentary newspapers in the lobby, and dry cleaning/laundry services. Free parking is available onsite.

Honestly speaking, I might not have booked this hotel in the first place had my friend not been looking for a cheap option. This was definitely cheaper than the boutique chain hotels that I usually opt for.

But this hotel was much better than my expectations. The reception area was warm and welcoming and the rooms were decent and clean. The Hotel was located on the 5th and 6th floor of a building and the view from the reception or the lift lobby was nice. I did not even check out the small window in the room, so cannot comment on the view from there. Being in the city center, the location was okay and approach decent. However, there was no subway or bus stop nearby and we had to rely heavily on taxis arranged by the hotel.

The staff spoke zero English and communicated with guests by using translator apps on their phones. So, you could only talk about basic things like calling a Taxi etc. but nothing else like what are good places to see or how to reach there.

Also at night, we saw many young boys and girls checking in at the reception. So, it is very likely that this is a popular place for youngsters to make out outside their homes and parents' knowledge. Or maybe this might even be a hotspot for prostitution although the area and the location did not apparently look like a place frequented by prostitutes and we did see some elderly (apparently married) couples in the hotel.

Apart from that, there was no cause for concern.

Not recommended at all.

Stayed for 4 nights for a business exhibition.
The staff is rude and hardly understands English. The entire hotel reeks from cigarette smoke. The staffs reply to this argument was that "Shanghai is a non-smoking city by law and therefore no one smokes at the hotel".
Breakfast is very busy, rooms are not equipt with anything but a toothbrosh and bar-soap.
Would not recommend it to anyone. Terrible experience.

We were in a nice little location. The walk to the subway was tiring when you walked around all day and your feet and legs hurt. The lobby was nice and decorated and the guest room was good too. Its a very small bathroom and when you open the door its so close to the toilet. If your a big person the bathroom will surley be a struggle for you. The water pressure for the shower was so low. I would stay here again if I needed to. There was a big problem and that problem was the other guests. They were always so loud talking in the hallway and you could hear a TV and someone snoring in the rooms beside ours. There was a lot of banging and so much noise going on in the hotel too I don't know what it was.

The hotel is nice, clean and comfortable. The staff are friendly, but don't speak much English. The breakfast is unusual for a westerner, but still tastes good. Since my visit last October, there were fewer cigarette butts in the corridor, which is good.

Overall, if I were to return to Shanghai, I'd stay here again

I can highly recommend booking this hotel! Found this place here on tripadvisor and wasn’t sure whether it was a good place or even fake. The place marked on the map is (at the time of writing) not accurate (for example, in google maps it is located on two different sites, one of them is wrong so be sure you are really looking at Pudan Rd.), also did mainly Chinese people comment on this hotel, so I was kind of alert. That’s why I decided to get back here on tripadvisor and give you a better idea. I will focus on the room, the breakfast and the location.
The hotel is mainly frequented by Chinese people (giving good reviews in Chinese here, too), so the staff hardly speaks any English. But they were friendly and helpful. The hotel has many rooms and the corridor seems endless when you go to your room.

We booked a “business room type B with queensize bed” for around 35 Euro per night without breakfast. Compared to other hotels we stayed in China, they offered great rooms for that price. The room was clean, in comfortable size (but with a small bathroom) and in good condition – no frills but overall everything worked as it should. Personally, I was happy that the bed was not too soft. Window blinds worked fine, no noise from the neighbours disturbed us. The view from the window was just to the other rooms opposite. WiFi worked perfectly (within the boundaries of the Great Firewall) and the AC, too. And if you felt lonely, you may have wanted to call one of those nearly-naked girls, whose business cards were continuingly placed under our door (no, I didn’t see any in the hotel).

The breakfast is nearly fully Chinese, I try to upload some pictures here on tripadvisor. This gives you a great chance to see what Chinese would expect for breakfast – on the other hand you may dislike their food after two days. Most dishes are hot, rice soup, different bitter vegetables and Chinese sauces, noodles, dumplings, water melon. The only “western” stuff you find there is toast, butter, jam and egg. You can book the room without breakfast (as we did) and then decide spontaneously if you want to have it. You just walk up to the breakfast room and put your room card into a card reader so they can charge you (costs 20 CYN = 3 EUR per person). They also offer dinner there.

The location itself was hard to find for us at first, we came walking at night and it didn’t attract much attention as the entrance to the hotel is only a small room with a turning door on the right side of a bigger complex, you will then take the elevator up to the 5th floor, where the hotel is actually located. The good point about the location is when you leave the hotel, you will find a big supermarket on the right as part of the complex building. All the next metro stations are about 15 minutes walking distance away (note that they are the lines you need to take to go to the main places such as airport or Bund). So it is possible to walk there, but can be exhausting in summer time. Probably the location is why it is a bit cheaper. You could also take the bus to get to those stations (see google for those numbers), but carefully count the stations you need and keep an eye on where you are going because the bus may not stop if nobody is waiting or leaving. Also mind that the 72h-metro card doesn’t work on the bus, they let us go for free then, otherwise it would have costed 2 RMB. For the airport we took a taxi to the next metro station, which cost also almost nothing, I though paid 15 RMB. By the way, there is a McDonalds at the metro station Zangqiao if you long for something normal.

One last thing that is maybe interesting to some of you: This hotel belongs to a budget hotel chain and I found that they also have plenty other hotels in Shanghai, just check Jijiang hotel on google maps. I noticed that when I came across another hotel of their chain in a very prominent central location, just right on the East Nanjin Road! So maybe also check some other places!