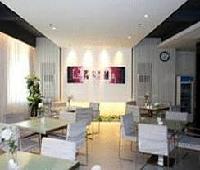 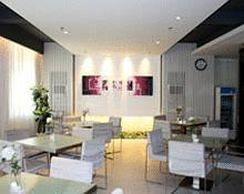 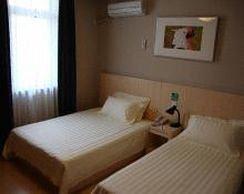 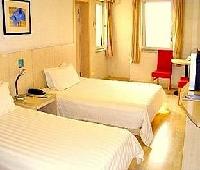 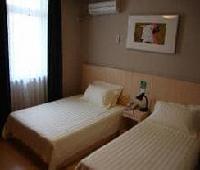 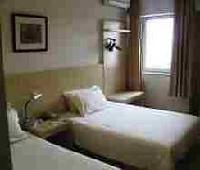 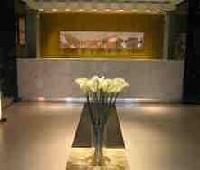 I stayed here for 2 months this Autumn (Yes, 2 months!) during a university work placement. All staff here were great and helped me a lot with my stay in Tianjin. The hotel exterior has been updated as of October 2015. It's in a pretty good location, about 7 minute walk to Xianyang Lu metro station. Bit of a weird location for westerners to stay unless you have particular reason to do so like I did. There's some good Chinese markets in the area to grab street food or McDonalds if you'd rather (only 3 min walk away). Prepare for lots of stares and comments if you're not Chinese: "laowai!" or "waiguoren!" (foreigner). They mean well though; don't be offended! Taxis are dirt cheap in Tianjin so usually your best bet (maybe 20 -25RMB to get downtown). Taxis are everywhere! Be careful with taxi drivers though, many tried to rip me off by taking me to the wrong places or overcharging me. One taxi took me to the wrong train station almost missing my train to Shanghai; 100% on purpose (too long to explain). Not a bad idea to learn how to ask for receipt in Mandarin. Back to the point... Only 1 of the receptionists spoke English (quite basic), the others used translation software. Not a problem though, you're in China after all... What did you expect? Buffet breakfast was excellent and is served from 6:45AM. The staff were great and actually let me eat at 6:30AM for the duration of my stay as I had to leave by then to get to work. The young lady in the restaurant welcomed me with a smile every day without fail! Credit to her.

The room was very good for the price I paid. Jinjiang's are always a good bet from my experience. TV was upgraded to a flat screen half way through my stay although there aren't any English channels. Wifi usually worked well but sometimes failed but I think that's just China in general. Slept well most nights, although the Chinese seem to struggle to not shout in the corridors late at night! All apart of the fun though. Expect prostitution flyers too... every night.

Thank you so much for the stay and I'd highly recommend this hotel if you're in the area/ Jinjiang's in general.

Not well located for foreign tourists

The nearest metro station is xianyang station which is a 25 minutes' walk. You wouldn't want to do that if you have heavy luggage with you. Plus you have to know which direction to head to once you are out of the 'right' metro station exit, or you will lose your way. Asking the locals may not help as there is another Jinjiang Inn in that area and you may be 'pointed' the way to the wrong one, as had happened to me.

That being said, the metro is great for going to the Tianjin Binhai International Airport. At the time when I was there, xianyang was the terminal station even though there were two more stations after that (which were not yet in operation). From xianyang, it is a 40 minutes' ride to the airport, which is the other terminal station.

Reception was good. Nice people, quick and efficient service for checking-in as well as checking out. The two male receptionists were very helpful when I asked for the bus numbers to various places like Ancient Culture Street, Italian Town and the popular shopping areas. The female ones were not quite helpful though. Verdict: Tianjin men are better than Tianjin women when it comes to the service industry.

They collected a 200 kuai deposit from me, but on the morning that I checked out, it was promptly returned to me without asking housekeeping to check if anything in the room was missing. So, they trusted me, and I wondered why they collected the deposit in the first place. Let's just say that if I had been pickpocketed, I knew I had at the very least 200 kuai with the hotel to take a taxi to the airport, and have a meal there, with some rmb to spare.

The room was supposed to be 'business class' but very small. I suppose my rank or status was not high enough and a small room was considered right for me.

Overall, the room was neat but the bed did not look clean, even though there was no foul smell, as I was found two strands of hair, one long and one short. It also looked old.

Amenities were adequate, though, and like most other Chinese hotels, there were two teabags, which were replenished daily, and the usual complimentary combs, toothbrush/paste. Hair and body shampoo were a 2-in-1. Bath towels, hand towels were adequate and clean, and changed daily.

The electric kettle and complimentary paper cups were great as I could make my 3-in-1 coffee with those.

I tried the noodles with pork ribs at the restaurant on the ground floor. It cost 18 yuan for some noodles with some ribs that must have belonged to a pig which was rather thin.

There was a also a small flat panel TV - 18" to 20", I reckon. I did not watch TV for the four nights when I was staying there, so I have no comments about this.

Free wifi was available and it was fast.

All in all, I would rate this hotel as passable, but for US$22, I am not complaining even though for that price, I had stayed in better hotels in China before.