C-73, Sadulganj, Bikaner,Bikaner,Rajasthan,India 2 Star Hotel
Check in
Check Out
it's not that great ... travel4rachel on

Looking for a peaceful getaway alongside nature, Marudyan Resort is just the place to be. Guests can enjoy their stay at any of the 20 tastefully furnished cottage rooms the resort has to offer. Tourist attractions around this hotel in Bikaner include Junagarh Fort, Lalgarh and Gajner Palace. 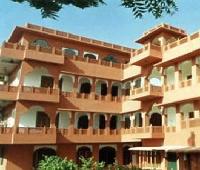 Looking for a peaceful getaway alongside nature, Marudyan Resort is just the place to be. Guests can enjoy their stay at any of the 20 tastefully furnished cottage rooms the resort has to offer. Tourist attractions around this hotel in Bikaner include Junagarh Fort, Lalgarh and Gajner Palace.

Surprise are everywhere while you travel and it was that one of them ,it was a small room with no interiors done but was clean and had all the basic amenities a room should have.Food is the limiting factor about this property, it tastes decent but the menu is very very limited.

I had initially booked a Camel Caravan Safari with night stay at the camp site and booked two rooms for the next day at the resort. Couple of weeks before I started my tour of Rajasthan I was informed by Mr. Karan, the owner, that the weather has changed and its become very cold and if we would want to go ahead with the Safari. After discussing with my family we had called off the safari and decided to stay for both nights at the resort. It was a good decision to call off the safari was what we realized after reaching Bikaner, the temperature had dipped and it was quiet chilly at night. The morning temperature showed 2 degree celsius on 31st Dec.
The resort is around 10 - 20 mins away from the main city and has great greenery available within its premises. The rooms were equipped with heaters which was good, as it helped beat the cold. The best part of the stay was food. It was freshly prepared home made food, and the Rajasthani delicacy were just finger licking good.

The pictures of the resort seemed very nice, but in actual the resort didn't live up to the ratings. The owner is very friendly and helpful, but the property is not maintained well. We visited in mid November, but it was supposed to be an off season and probably the reason.

The weather during December was great. Though the nights were cold the hotel set up a campfire for us and everyone enjoyed it. Days were sunny and we enjoyed lazing in the garden which was very peaceful after Delhi. Rooms were good and they had heaters so were cosy at night. Food is home cooked so we had to order earlier and it was excellent. The only problem we faced was having to walk in the cold to the dining room to eat or ask for anything as the hotel does not provide room service, nor do they have intercoms in rooms. There are also 3 dogs which belong to the owners and stay on the campus, but these are very friendly and great company.

My wife and I stayed at the Resort from January 3 to 5, 2015. A lovely stay. The owner and his wife and their three dogs were the perfect hosts. The hotel is situated in a large property full of trees. The Kinoo (Mandarin Oranges?) trees were in fruit and we plucked/collected many Kinoos.
The food was lightly spiced and excellent. Very reasonably priced.
Travellers must keep in mind that the resort is about 10 kilometres from the city-centre and there isn't too much to do on the property itself, other than walk about, sit in the sun and read.