The Houseboat is located right in the heart of famous Dallake and 6kms from Mughal Gardens and Shankracharya Temple, and is surrounded by beautiful snowcapped mountains. Guests, who enjoy this stay option, are usually foreigners, who are provided with 24hours room service. It offers scrumptious fare that includes Indian, Chinese and Kashmiri cuisine. Check-in time: 12.30p.m. 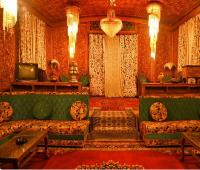 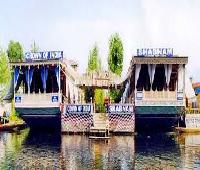 The Houseboat is located right in the heart of famous Dallake and 6kms from Mughal Gardens and Shankracharya Temple, and is surrounded by beautiful snowcapped mountains. Guests, who enjoy this stay option, are usually foreigners, who are provided with 24hours room service. It offers scrumptious fare that includes Indian, Chinese and Kashmiri cuisine. Check-in time: 12.30p.m.

PLEASE READ BEFORE BOOKING SHEARINGS BATTLE FIELD TOUR. Food on this tour appalling no vegtables, salads or fruit served with any meals. Last day on trip after complaining we finally got to have some green beans. Advertised as TV in rooms. Didn't work and not TV station that spoke any English which normally you do get on satellite stations. Hairdryer. Quicker to have gone outside and stood in the wind to get hair dry. Surrounding area not very pleasant. In supermarket with 2 guys from trip when asked by someone if we could pay for something. In other words begging. This was in daylight hours so after dark was a no go area. Very bad Battlefield trip.

The good and the bad!

I agree with the person who left the review stating all the bad and good things about their 5 day
Somme Battlefields tour. The person that disagreed with the bad things and said ignore the not so good review obviously didn't have the very small claustrophobic room with no bath and a foot up step to the shower. True as they stated it you had mobility problems you would struggle. Both of the rooms our friends and I were given had the very high step. Oh and rubbish under the bed. Only in ours!!! Easy to disagree when you are okay!
You maybe were given a good room as this is hit and miss! Maybe your hairdryer was okay and Shearings had sent you a nice gift pack - it seems that this is a random thing and once again if you didn't get one after paying the same money you would feel aggrieved.
We went with friends and they shared our opinion about the food and drinks. We know and understand that it was a very cheap break and you may say you get what you pay for but we took this into account and feel that we didn't.
The comment about the drinks was also correct as it seems you can be charged anything that they like.
Well Shearings it is a shame that you don't value all of your customers and their comments. I won't be contacting you either as there is obviously no point. I also agree that Mike the driver was great and the guide Conrad was knowledgable and super at his job. Shame about the standard of accommodation, food and drinks. A matter of opinion I know but allowed I am sure. Take as you find we did and were hugely disappointed with the hotel. Good luck to those that weren't you were the lucky ones so do not be so quick to condemn those that had genuine grievances and were disappointed. The tour of the Somme itself was a great and moving experience.

Ok for one night but needs a makeover.

oAfter a long cycle trip I was a bit disappointed in the hotel. One night stay was enough , it was clean but rooms very dated. Small bathroom.
Opposite the train station so was a bit noisy at night and early morning.
Breakfast area lovely.

Battlefields of the Somme

We have just returned from an extremely informative tour with Shearings. Ignore the previous derogatory review of this hotel. It was spotless, quiet and had the most wonderful staff who all speak a high of standard of English. Of course with a party group you expect a set menu. That said we had a delicious 3 course dinner with a different 3 course meal each evening. When a fish dish was brought out the staff were more than happy to prepare a different main for those of us who do not eat fish. The town centre is only 5-10 min walk away.We had a most enjoyable stay and would not hesitate to stay here again.