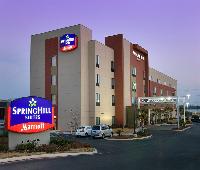 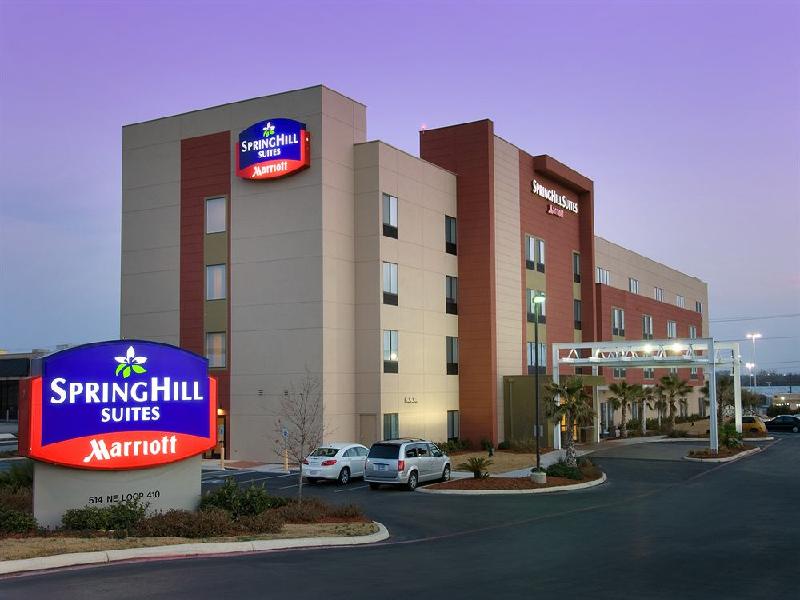 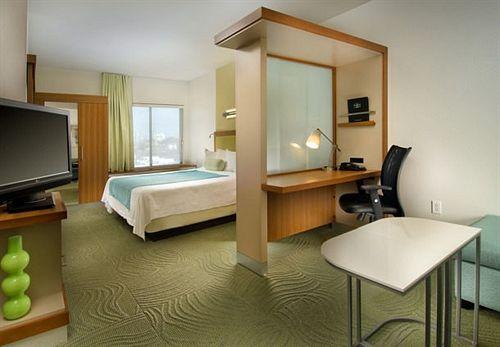 Property Location When you stay at SpringHill Suites by Marriott San Antonio Airport in San Antonio, you'll be near the airport and close to North Star Mall and Marion Koogler McNay Art Museum. This hotel is within the vicinity of Texas Transportation Museum and McAllister Park. Rooms Make yourself at home in one of the 116 air-conditioned rooms featuring microwaves. Complimentary wired and wireless Internet access keeps you connected, and cable programming provides entertainment. Conveniences include desks and coffee/tea makers. Rec, Spa, Premium Amenities Be sure to enjoy recreational amenities including an indoor pool and a fitness facility. Dining A complimentary breakfast is included. Business, Other Amenities Featured amenities include a safe deposit box at the front desk and coffee/tea in the lobby. Planning an event in San Antonio? This hotel has facilities measuring 546 square feet (49 square meters), including a meeting/conference room. A roundtrip airport shuttle is complimentary (available on request). 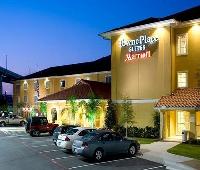 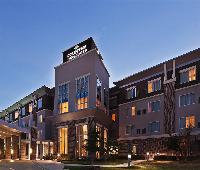 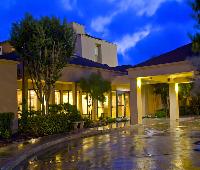 Property Location When you stay at SpringHill Suites by Marriott San Antonio Airport in San Antonio, you'll be near the airport and close to North Star Mall and Marion Koogler McNay Art Museum. This hotel is within the vicinity of Texas Transportation Museum and McAllister Park. Rooms Make yourself at home in one of the 116 air-conditioned rooms featuring microwaves. Complimentary wired and wireless Internet access keeps you connected, and cable programming provides entertainment. Conveniences include desks and coffee/tea makers. Rec, Spa, Premium Amenities Be sure to enjoy recreational amenities including an indoor pool and a fitness facility. Dining A complimentary breakfast is included. Business, Other Amenities Featured amenities include a safe deposit box at the front desk and coffee/tea in the lobby. Planning an event in San Antonio? This hotel has facilities measuring 546 square feet (49 square meters), including a meeting/conference room. A roundtrip airport shuttle is complimentary (available on request).

Arrived late at night and was promptly picked up at airport. Our room was on the 4th floor and I heard planes flying over all night. Room was well appointed and clean. Wasn't impressed with the breakfast. Scrambled eggs, cereal, bagels. Problem was that only 1 slot of the toaster was working and people were waiting to use it. The staff was very helpful and we had no problem being taken to the car rental to pick up our car. We returned 4 days later and we had many members of our group being brought to the airport beginning at 4:30am as we all had different flight times. Not one had any problem. This time our room was on the 3rd floor and the plane noise level was better. Still don't understand why the broken toaster wasn't immediately replaced sice they were aware prior to my telling them.

Thank you for several great stays! I'd like to recognize Juan at the front desk in particular.

I've stayed there a total of 8 nights on 3 different stays and I've been very happy every time. The staff is always courteous and helpful and the shuttle drivers have always been conscientious and accommodating. During my most recent stay, I forgot the remote control for my Roku and didn't realize it until several days later. I called and spoke to Juan who was very cheerful and eager to help. He was able to track down my item and arrange for it to be mailed to me. Not only did it arrive quickly but Juan took the extra step of enclosing a very nice hand written note with it. (and the hotel only charged me postage and didn't add a 'service charge' as some other hotels do)

To the Spring Hill Suites management, you're doing the right thing by hiring good people and keeping them happy. Thanks to housekeeping for finding and holding my remote control, Juan and front desk staff for tracking it down and sending it.

My boyfriend and I are on a cross country road trip and found this hotel using the hoteltonight app. For some reason the reservation hasn’t gone thru and I’ve had this happen before where I have to call the app myself and figure it out. This time Jim (Jimmy) at the front desk made the process so easy and painless and called for us and had us checked in within minutes!! He was so kind and helpful and made us feel welcome. Exactly the kind of person you want to greet you after all day in the car. The room is great and clean but it was Jim who made the difference for us! Thanks for a great stay

Decent Hotel, but Some Room for Improvement

I am a Marriott Lifetime Platinum so I have spent a lot of time in Marriott brand hotels. I always prefer Springhill Suites (SS) properties when they fit my budget.

The rooms are big and comfortable. If you have stayed in a SS before it will look very familiar. The sofa and ottoman I think were West Elm which was a nice distinction from other SS hotels. The bed was very nice. I especially appreciate the TV setup with the external connections and power connection right there on the front. I travel with a media player that I hook up to the hotel room televisions. Many hotels make this extremely difficult or impossible. This was the easiest setup I have come across.

Travelers today really desire USB connections to charge our accessories or an alternative on plenty of power outlets. This room had both. There was power at the desk and the desk lamp and the bedside lamp have USB plugs in them. Very nice touch.

The lobby is a very nice step up from the usual SS setup. I always liked the normal SS lobby but this was a little bit nicer. The morning breakfast is very typical. There were plenty of choices. One suggestion for them would be to offer turkey sausage as an alternative. Some hotels offer both. But overall I liked the breakfast.

The location is REALLY convenient to the airport and the car rental return is just across the street. I found plenty of good places to eat in the area. You might find the proximity to the airport to be a little concerning. The property is on the approach to the runway so you will hear planes taking off and landing. I heard a plane landing every now and then in the evening so either the airport isn't that busy or I tuned it out because it really wasn't an issue. I did hear a plane landing at about 5:30AM one or two mornings. But again, it wasn't that big of a deal to me.

Now there were a few issues too. Here are some less than stellar things I noted in my recent stay.

My room was clean. The lobby, the lobby bathroom, and the hallways all appear to be well cleaned. The only housekeeping issue I ran into was that they would take my bath mat and not replace it. I was there five nights and this happened on two occasions. I ended up using a full size bath towel on the floor outside the shower.

Maintenance issue #1. My shower door did not close. It held open about 1-2 inches. I would try to hold the door closed with one hand while washing with another. This is why the bath mat was so important to me.

Maintenance issue #2.The controls for the HVAC did not function. Fortunately, it was just right for my preferences. On my first day upon walking into the room I usually crank up the AC as the rooms are usually too warm for my preference. I tried to operate the panel but the screen appeared dead. But, in the end, the temperature ended up being fine. Others might find it too cold though.

Couple issues I had in the morning breakfast area. I found the breakfast to be just fine. I thought the food was delicious. But, one morning all the televisions were tuned to Charmed and Married with Children. There were no remotes to change the channels. Usually we want to see Sports Center or national news like CNN in the morning. It was kind of comical. One morning I noticed no glassware for the water and juice. I used a coffee cup from the coffee stand. Which was actually better since it was larger. Another morning there were no napkins. Which again, I was able to get at the coffee stand. Now, on those two mornings when there weren't cups or napkins I was one of the first 5-6 people eating breakfast. It was shortly after 6:30 AM so they were still sort of getting ready. But by the time I left at nearly 7:00 AM they still didn't have those items out.

This location is directly across from the airport. In the early morning 6-9 am and late evening 8-12 midnight, airplanes fly over the hotel as they head to land at the airport. It sounds like they are so close that they are going to crash into the hotel but I'm happy that none did during my stay and I pray for the same in the future. So, DON'T stay here if you are paranoid about planes being too close, flying over your hotel, or have PTSD where this may trigger your symptoms. I stayed at the SpringHill Suites San Antonio Airport for 13 nights. I was in San Antonio for 2 weeks because my mother was in the hospital. Everyday in the hotel was a different experience when I returned to the hotel in the late evening hours between 10 pm - midnight. For some reason, something wasn't done - my room wasn't cleaned, the trashed wasn't taken out, the towels were removed from my room but no replacement towels were left in the room, the shower and sinks were not cleaned. I had to leave notes for the room service personnel but sometimes they either didn't come in the room to see the note or they didn't comply with my request. So, not only was I under a lot of stress because my mother was very sick in the hospital but then I had to go back to my room in the midnight hours to deal with the disfunction in my room or to call the front desk and request for them to bring me towels, linen, hair dryer, or soap. Upon check-in, there was food in the refrigerator from the previous guests. One day, the TV was missing - so, the front desk attendant brought one up at about midnight. I had to request a hair dryer 3 times before they brought me a hair dryer that WORKED and that was only AFTER they told me that they didn't have anymore available and I told them that they needed to get a working hair dryer from an empty room because the hotel webpage states that hair dryers are available for customers and that was the reason that I had not brought one with me. They eventually brought one up after I had left for the day with wet hair. The shower room lights are dim and terrible for putting make-up on. The mirrors in the bathroom (separate from shower) are very small and almost useless - good luck if you want to put make-up on in there. The mirrors are probably about 12 inches wide and placed in the corner along with a corner sink. The sitting and desk area is nice and functional. The breakfast buffet does not deserve raving reviews - I skipped breakfast there - due to very limited options. The outdoor furniture is very worn and beat-up. Overall, I couldn't believe that Marriott has lowered their standards and customer support. I will not stay at this location again.