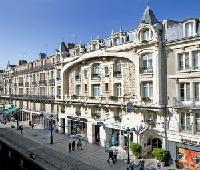 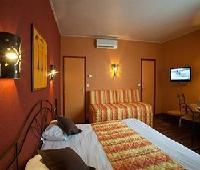 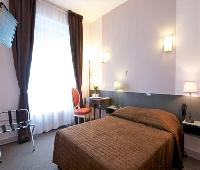 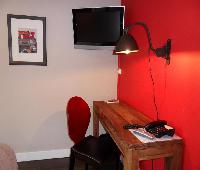 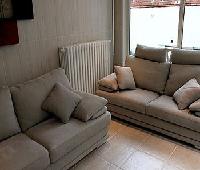 The hotel is nice, the staff is helpful and it is a nice location to walk from into the town. As said by others, parking is a challenge. The room was fine and bathroom serviceable, though the shower was about the size of the elevator. It's hard to recommend due to the parking issues, but it is ok otherwise. Breakfast was ok, a few choices but ok.

We made the mistake of arriving in Orleans on a Saturday afternoon . the traffic was chaotic and the roads quite difficult to navigate. We could see the sign outside the hotel, but it took us three trips round the city before eventually negotiating the pedestrian walkway which seemed to be the only way to access the hotel. No where in the hotel blurb does it say how to access the hotel, and there were no street signs to help. As already said in other reviews, we found ourselves in a road for trams only. We had to drive down the pavement avoiding a bunch of drunks and drug addicts. The receptionist was helpful, but the reception area is tiny and trying to unload two cars with all our goods and chattels was a struggle to say the least. We had no time to see the room as we had run out of time and had to move the cars to nthe car park about quarter of a mile away through some very narrow one way streets.
We finally got checked in to our room only to find we had a lovely view overlooking the roof of the kitchens complete with pipes and air conditioning units.
The bathroom was point and extremely narrow and when you had a shower the water sprayed all over the bathroom. If you are bigger than a size 16 good luck using the facilities.
The only saving grace for us was that the staff were pleasant and the breakfast was good.
I appreciate that the hotel is in the center of a large city and that space is at a premium, but it did not live up to be expectations and it was not worth the €139 a night price tag.
We were meant to stay for two days but checked out after one night and moved on.
One last word of advice. One of the cars we had was a hire car from Avis. We tried to drop the car off on the Saturday at the station where their web site says it has a depot. It doesn't!! Besides which , even if it did, Avis are not open for business on a Saturday or Sunday.!!!

We stayed here for one night in August in room 32. The room was ok, but the air conditioning wither didn't work or was so poor the room was very hot - so no sleep - but the cold showers we took were great! (There was hot water by the way)

The room overlooked the pedestrianised streets through which the trams run = so very noisy and expect to be woken up around 4.30am

Access by car is complicated, we got stopped by the police and finally figured out the one way access but the parking is in a car park 10-15mins away - 30Euro for 24 hours!

Couldn't recommend and we wont revisit this one I am afraid

Nice but getting here a nightmare

We Muttonens are great believers in the economic division of labour. One of us drives while the other navigates: we call it playing to our strengths and out of respect to Mrs M, I will spare her embarrassment by not saying what her strength is hers and what mine.
The navigator of us is assisted, usually ably, by a woman of indeterminate age whom (on a good day) we call Mildred, our satnav narrator. When Mildred intones "Recalculating" our hearts sink; but annoyance rises when we are listening to an audiobook, get to a point where we really want to hear what's happening, and what does Mildred do but break in with "Enter the roundabout and take the third exit"?
Even so, we have got used to such irritation, which has never soured the collaborative relationship between driver and navigator on which every successful car trip depends, so you might appreciate that something capable of sending the driver's hands towards the navigator's throat, in a gesture that boded neither of them much good, must have been a serious problem indeed.
The problem was this. The entrance to the hotel is on a pedestrianised street, although 15 minutes of offloading time are allowed before you have to tootle down to public parking safely beneath the main city square down the road. What the hotel doesn't tell you is what to if the button you're supposed to press to lower the obstructing bollard on the road round the corner doesn't work. Round and round the complicated road system we went, trying in vain to find an alternative way in. Poor Mildred did well to cope with a plethora of unexpected road works and diversions, but tempers within the compact Auris gradually rose to the ambient outside temperature as if the aircon had conked out.
A brainwave in the heatwave: park car in public car park first and then plod along to the hotel on foot, even with assorted luggage in sweltering weather. But Best Western Orleans really should give more precise advance advice to car-borne guests.
Fortunately hotel staff turned out to be lovely and friendly and the room was just what we wanted. Great walking around the city, bracketed by a really nice lunch and delicious dinner, restored the relationship of Muttonens senior to its normal tranquillity; but who knows what tomorrow will bring?

We stayed at this hotel as an overnight stop travelling back from the French Alps. The location and hotel were a complete punt and we were not disappointed.

The Hotel D'Arc is exceptionally well appointed. Our room was lovely and the bed one of the most comfortable I have ever slept in. The staff were very helpful. The hotel has some quirky features - like an old fashioned lift that only takes a few people. And it is right in the heart of Orleans which, as we discovered, is a fantastic city to walk around.

The hotel has a partnership with a local car park providing cheap and safe parking for your car.

I strongly recommend both the hotel and Orleans