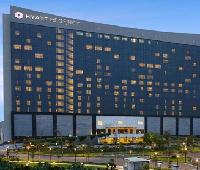 From start to finish we experienced excellent service.
We looked forward to breakfast there was so much variety. We enjoyed being served by Aatish, Mohith,Devan . They really pulled out all the stops I can’t praise them enough

The room itself was always clean and tidy and we were always given plenty of toiletries and extras.

The bed was extremely soft and comfortable.

The only downside was we had to renew the room key everyday.

The Hyatt is nicely located near two major shopping malls. The rooms are nice and tasteful. The food at the restaurant Kitchen at 95 has a decent fare of Indian as well as Thai, Chinese, Conti etc. The service at the restaurant is courteous and prompt. For rooms, location, food I give them 5 stars. However, the sales and front desk get just a 1 star.
We visited Ludhiana on work. The tie up was done beforehand, for the package. However, checkout was a nightmare! It took almost 2 hours. The format of the bill was requested to be changed (not the rates), but the front desk seemed incapable. After numerous calls and discussions, they got our requirements. Then the billing was incompetent to the extent that my card payment was linked to my colleagues and his to mine, the bill numbers were mixed up..... Phew. And to add to our misery, the sales rep we had spoken to for our booking said, that this issue has been on since introduction of GST and the last two groups of govt employees had the same problem. If only she had informed us earlier.. we would have made alternate arrangements.
Then came the packed dinner we asked for, which was worse than what a dhaba would do...Their idea of packed dinner for two included a qtr container of noodles, four thick half burnt chappatis, chicken curry with 2 boneless pieces and egg curry with 2 eggs. No spoons, no forks, no salad.... Amazing, cant believe this is a 5 🌟 hotel.
What started as a great experience ended terribly.

Hyatt Regency is a bit out of town on Ferozepur Road but it is a good bright hotel. The staff are very courteous and efficient. Check in was easy and quick. It has very friendly hotel staff with good security. We were allocated well furnished rooms on the sixth floor and everything looked clean and tidy. We were looked after by Maya with a lovely friendly smile and she was great help whilst our stay with local information and anything we required. The busy Breakfast restaurant was run with care and attention by Atish. Overall a satisfying stay with a smile especially from Maya at reception. When we are back in Ludhiana again will definitely stay at the Hyatt. Well done Hyatt Ludhiana and thank you Maya.

A hotel which could be much better !!

We were here for 5 nights in September. Our stay was comfortable , but at the same time had flaws which could not be overlooked.
We began on a very sour note , with a botched up transfer from the railway station , despite having made a zillion calls to the hotel. This too as they never replied back to any email that we sent. The situation was so bad , that we did not know the car/driver details even after our Shatabdi had entered Punjab. Once we did , it turned out that the driver had no clue about any pick-up.
As expected , I made a desperate call to the hotel for clarification , but an untrained employee began a long "questionnaire" regarding details of my stay , which had no relevance to the scenario. Thus , I was forced to directly coordinate with the cab company. Surprisingly , the hotel employee I spoke to did not even bother to follow up & call me back.
Unlike any other good hotel , which sends a hotel representative/driver right inside your coach for assistance , we had to make our way out of the station & struggle locating the driver in the sea of people out there. On arrival at the hotel , nobody even bothered to ask ( forget an apology ) , for the chaos that had just ensued.
Once we reached our room , it was spacious & well designed , but the ceiling lights kept flickering , and were not noticed by the housekeeping throughout the stay. We decided to have some tea before we hit the sack , but there were no sachets at all & the kettle was stained & smelly. This was the last thing one expects in a Hyatt.
The worst bit perhaps were the poor communication skills as well as the overall training of the staff members at the front desk / lobby ( except for Mr. Anmol ). They had no idea about anything , and even if you ask them a question which required a reply , they would blindly say yes/no. One night , one of these guys started knocking at our door at 2 AM , with luggage in his hand , as he had "apparently" misheard the room no. One day we specifically told a lady at the front desk to ensure our room was cleaned by the time we returned back from the city. But this message wasn't communicated , forcing us to wait in the lobby for half an hour once we returned.
At the time of check-out , we again notified them about our station transfer , but were shockingly provided with a Chevrolet Beat , a car with negligible boot space , that too for the luggage of 3 people , forcing us to keep 1 suitcase on our lap. What was more surprising was that one of the guys , who was a porter-cum-front desk employee , had kept our luggage in the first car which came in the porch , without even verifying if it was for us or another guest.
The saving grace is the great service at the restaurant during breakfast , and the only reason why I've given an extra star to the property. I was so impressed by the personal attention given to each and every guest , all under the supervision of Mr. Rishabh. He ensures that the staff members ( like Atish , Ajay & Deepak ) provide whatever guests require ( based on their observation of the guest's likes & dislikes ) without them even bothering to ask or tell. This might be a bit intrusive for certain guests , but not for me , and something I miss at most hotels in the metro cities.
Would I be returning to the hotel ? Absolutely , as I'm confident they would read , analyse & rectify their mistakes.

Never had expected a place like Ludhiana would have such fantastic hotel and the staff right from checking in and at food restaurant were so welcoming and caring. Can make your stay memorable.will congratulate everyone for keeping such high standards